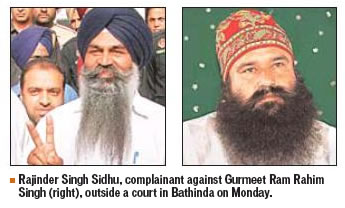 Bathinda, Punjab: Charge of hurting religious sentiments; Sira- based Dera Sacha Sauda chief summoned to hearing on May 10. A Bathinda court on Monday rejected the police cancellation report in the 2007 Jame- Insan controversy case against Gurmeet Ram Rahim Singh, head of Dera Sacha Sauda, and directed him to appear in person on May 10.

The CJM wants the dera chief in court, if he wants to secure regular bail. The judge also asked the public prosecutor for a list of witnesses.

The court was to decide on the police cancellation report on March 27 but it had to defer it for April 2 in the wake of tension in Punjab because of suspense on the hanging of Balwant Singh Rajoana for the assassination of chief minister Beant Singh in 1995.

Rajinder Singh Sidhu, complainant in the Jam- e- Insan controversy case in which the dera chief is alleged to have tried to ape the attire of Guru Gobind Singh, has welcomed the court’s direction. “The dera head played with the sentiments of Sikhs,” he said. “He deserves the severest of punishments. I stand by my complaint, and had never asked the police to withdraw it.”