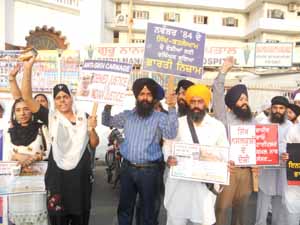 PU students protest against denial of justice to 1984 victims

Chandigarh,Punjab: As per reports the members of Students for Society (SFS) organized a demonstration on November 04, 2012 at Punjab University, Chandigarh campus demanding justice for the victims of November 1984 violence against the Sikhs.

According to information students burned the effigy of “communal politics” of ruling class and “unitary structure” while shouting slogans against the fascist and communal forces in the country.

Addressing the gathering, Raminder Singh, SFS President said that the minorities had been on the suffering side in the country and the role of the state had been active in these incidents.

“The perpetrators have to be brought to justice even though they may be political figures,” he added.

Attributing it to the ill-founded Centre-state relations prevailing in the country, the party advocated a federal structure.

“Ours is a multi-lingual and multi-cultural society and nationalism should be by choice and not compulsion,” he added.

The protest also marked the twelve years of struggle of Irom Sharmila against AFSPA with the members condemning the Act as ‘draconian’.

Previous: Suspicious man at Oak Creek Gurudwara (United States) quizzed by authorities
Next: Sikh body writes to Canadian PM Harper ahead of his visit to India