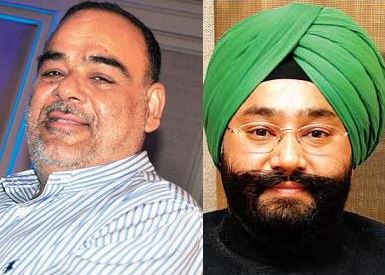 Ponty Chadha: Inside story of bloodbath

Comments Off on Ponty Chadha: Inside story of bloodbath 994 Views

New Delhi, India: It may sound strange that a man in control of over Rs 10,000 crore business empire, besides hidden assets and business probably worth more than that, should lead a group of armed men to occupy a disputed property even if it were a 12 acre farm house in South Delhi’s posh Chhattarpur area and the occupant was none other than his younger brother. But Ponty Chadha actually did that and paid up with his life.

As details of Saturday afternoon’s bloodbath at Chadha’s farm house start trickling in, investigators revealed, after preliminary questioning of about a dozen odd people rounded up, that Ponty Chadha actually led a group of armed people to occupy the 12-acre Chhattarpur farmhouse worth just about Rs 200 crore – peanuts for a billionaire.

However, Chadha’s close associates are of the opinion that it was actually not the price of the property, but the worth of it. Moreover, Ponty was learnt to be not prepared to accept that someone, even if it was his own brother, had grabbed his property.

A man, who was known to be liquor and real estate baron, so close to the corridors of power was actually learnt to be feeling desperate to occupy the property which he thought should belong to him no matter the cost.

And that too, the man who was known for eyeing the properties and possessing these at whatever cost and means, fair or foul, could not occupy a property which he thought belonged to him, had made him feel desperate and restless.

But it will cost him his own life, he may never have imagined, since he knew that no security guard deployed at the farm house would dare to stop him, leave aside attack him. And actually nobody dared to stop or object to him and it was his own brother who shot him dead.

According to the available details, both Ponty and his slain brother Hardeep used to stay together in a nearby farmhouse in Chhattarpur area only. However, they separated after the demise of their father Kulwant Singh Chadha. Hardeep retained the control of the 12-acre farm house which Ponty wanted so desperately (and as it comes out now at the cost of his own life). Hardeep declined and resisted.

It was on Saturday around 12 noon that Ponty decided to personally take control of the farmhouse. Given the fact that most of the employees, including the security guards working for the two brothers were known to both of them, everybody was reluctant to interfere or intervene. Hence, Ponty decided to personally lead his men into the farmhouse and he actually did so.

As he, accompanied by several armed men the number of who is stated to be somewhere between 20 to 40, arrived at the farmhouse, nobody resisted him initially. As his men started beating up and thrashing the security personnel and other staff members throwing away all the things there, someone from the staff called Hardeep, who was away to Noida on some business trip who instantly rushed back.

Meanwhile, the main gates of the farmhouse had been closed. Hardeep arrived in his Mercedes car and saw the main gates closed. He entered from the rear gate. As he encountered his brother they started arguing that led to a strong altercation.

Apparently, an aghast and furious Hardeep, seeing himself outnumbered and dispossessed with so many security guards of Ponty around, in the spur of the moment shot at his brother indiscriminately. As he tried to run away, Ponty’s security guards shot him dead.

Thus, ended a great saga of fortune in a greater tragedy; two blood brothers lying in pool of blood. The two brothers who until recent past were so close to each other, were both dead. And the dispute between them, the joint owners of an empire worth about Rs 10,000 crore, was over a farmhouse not worth more than Rs 200 crore.

2012-11-18
SSNews
Previous: War of words erupts between Punjab CM Badal and Delhi CM Dikshit
Next: Trouble ferments for distilleries: PPP to join protest to save drain