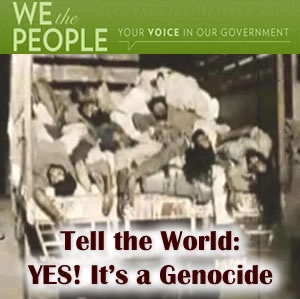 Jalandhar,Punjab: A petition being moved to Obama administration for recognizing November 1984 massacre of Sikhs in Delhi and in other parts of the country as “Genocide” has already been signed by over 7,500 persons.

Initiated on November 15 by rights organization Sikhs for Justice and a few other organizations the petition argues that the intentional and deliberate nature of the attacks on Sikh lives, properties and places of worship during November 1984 makes them crime of “Genocide” as defined in 18 USC 1091 and as per Article 2 of the U.N. Convention on Genocide.

It has already picked up pace in gathering signatures and on Sunday the momentum further in creased. SFJ Legal Advisor Gurpatwant Singh Pannun said that the petition required 25,000 signatures by December 15. Rights activists are optimistic that as the pace has picked up with spreading of the word around the petition may be able to gather more than the stipulated signatures.

“During November 1984 the Congress Party of India organized and perpetrated violence with intent to destroy the Sikh community, resulting in more than 30,000 killed; women raped; Gurudwaras burnt and more than 300,000 displaced. The systematic violence against Sikhs was concealed and portrayed by the Indian governments as Anti-Sikh Riots,” the petition has argued.

“In 2011-12 mass graves of Sikhs killed during November 1984 were discovered throughout India, which is the most specific and convincing evidence that violence against Sikhs in 1984 was genocide,” it has further argued while seeking recognition from Obama administration. Source: TTN

SikhWire Editor: we officially endorse this petition and encourage our readers to sign this petition ASAP.  Petition banner/link is on our front page.