Wisconsin,USA:Outside Bodek Lounge there is a pile of shoes — inside, a group of barefoot students. Some are wearing turbans, others are wearing bandanas. Some have beards, others are clean shaven. All are participating in a langar, or community meal, to commemorate the six Sikhs that were murdered in the Wisconsin temple shooting this past August.

As students of all backgrounds enter Bodek, Sikh students welcome them in and ask them to sit on a white cloth on the floor. In Sikhism, sitting down symbolizes humility and equality, central values in the religion.

So begins a gathering of the Penn Sikh Organization, a relatively under-the-radar student group on campus. While Sikhism is among the largest organized religions in the world, it is often clouded by misunderstanding and plagued with a lack of awareness. Because Sikh men often wear turbans and have long beards, many confuse them with Muslims.

“The only good that really could come out of the shooting is people learning more about Sikhism and the differences between religions,” said Wharton senior Amrit Bhinder, president of PSO. “I mean, I’m not a Muslim, I’m not a Hindu — I’m a Sikh.”

Since the majority of Sikhs live in India, Americans often have little exposure to the religion. PSO is striving to change that reality and teach Penn students about the values and history of Sikhism.

Founded in the 15th century in the Punjab region of India by Guru Nanak Dev, Sikhism is a monotheistic religion that stresses a balance between work and community service.

“Since our community’s small, it helps us to get to know each other better,” she explained.

Bhinder believes this summer’s shooting was a shocking attack on Sikhism, as well as on peace and acceptance as a whole.

Bhinder has been involved with PSO since her freshman year. Currently, she said there are about 20 active students in the organization, but it is looking to recruit freshmen.

“Whenever I see a Sikh on campus I just run up to them and ask them their name,” Bhinder said, adding that it helps that all Sikhs wear an iron bracelet on their right arm.

This bracelet, called a “kara” in Punjabi, is one of the “five ‘K’s’” of Sikhism. College sophomore Aman Singh has worn a kara his whole life. His parents told him it was “to remind you to do the right thing.”

Singh also recalled his parent’s explanation of a second “K”, kachera, or underwear. It stands for being mindful of your actions. “Don’t be doing things you shouldn’t be doing,” Singh’s parents told him.

One of the more visible “K’s” is kesh, or uncut hair. According to their holy scripture, the Guru Granth Sahib, Sikhs are not supposed to cut their hair, and men are supposed to cover their hair with turbans.

The last two “K’s” are kangha, a comb, standing for being well-kept, and kirpan, a ceremonial blade that is used to cut a sweet porridge at the end of prayer services.

Whether or not they keep all five “K’s,” all Sikhs recognize the importance of seva, or community service.

Some practice seva by preparing the food for a langar. Before coming to Penn, Singh fulfilled his seva by helping to create prosthetic arms for an organization in his hometown of San Francisco.

To respect the Guru Granth Sahib, Sikhs will take off their shoes when inside a temple, “so you will find people sitting and actually polishing other people’s shoes,” Prabhjot Singh, a second-year Engineering graduate student, explained, adding that this is their form of seva.

Coming from such a rich tradition, Sikh students at Penn try to maintain their own lifestyles through religious principles.

One of the amenities that is available to Penn students is the Sikh temple on 69th Street. Many Sikh students find their way to the temple on a weekly or monthly basis.

When he was choosing between Yale University and Penn, Prabhjot Singh said he considered the proximity of both schools to a Sikh temple.

“To some extent that did influence my decision in coming to Penn,” he explained.

He added that he has never encountered any intolerance while on Penn’s campus.

“Frankly speaking, the people here are very accepting,” Prabhjot Singh said. “I didn’t expect the transition to be easy, but I’ve never had any problems.”

“People here are pretty open,” she said. “They’re not as ignorant as the average American.”

Outside of Penn’s campus, though, Sikhs have encountered prejudice over the years.

“After 9/11, things sort of changed for a lot of South Asian religions,” Bhinder said. “I just think Sikhism is really prominent because men wear the turbans. Even now sometimes people say things to my father, who wears a turban. That does get a little sad because I wish people were a little more tolerant, or just a little more educated.” 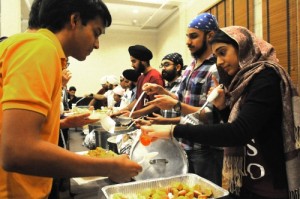 Tagged with: history of Sikhism 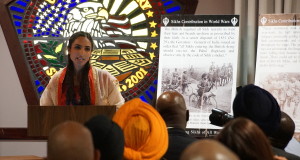 The First-Ever Sikh Prayer at the Pentagon