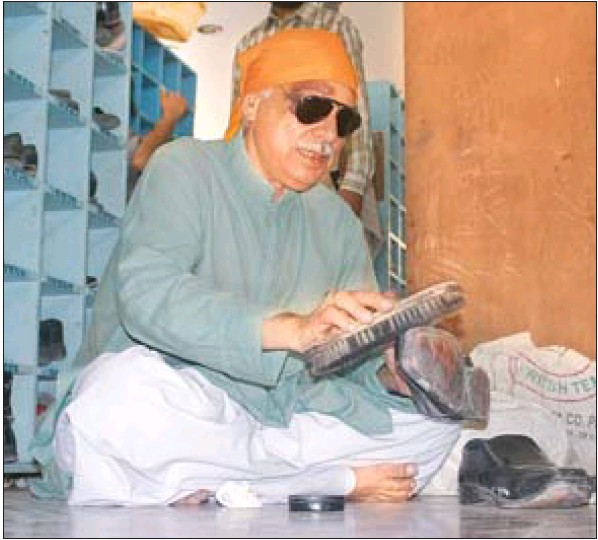 Islamabad, Pakistan: Pakistan’s deputy attorney general (DAG) Khurshid Khan has been given a notice by the Supreme Court’s Bar Association (SCBA) to explain why action should not be taken against him for “defaming” the nation by polishing shoes while performing voluntary service at places of worship in India.

The showcause notice was issued to Khan on Saturday by the association at the Peshawar high court. Khan lives and works in the northwestern city of Peshawar.

He has said that he performed voluntary service at gurdwaras, including cleaning shoes, during a visit to India earlier this year as “penance for crimes committed by the Taliban”.

Khan had gone to India with 200 members of the SCBA in March to interact with the legal fraternity. His voluntary service at Jamia Masjid in Chandigarh, Golden Temple in Amritsar and Birla temple in New Delhi – including polishing shoes, sweeping floors and washing dishes – had received extensive coverage in the Indian and Pakistani media.

Yasin Azad, SCBA president, was quoted by The Express Tribune as saying that Khan had “defamed” Pakistan by polishing shoes outside places of worship in India.

“Although it was the government’s duty to issue him the showcause notice, as he is a serving deputy attorney general, we have issued it instead,” Azad said.

“Khurshid told us that he did this to be pardoned for all the sins he has committed in his life,” Azad added.

He contended that Khan could have acted in a “more respectable way”.

Khan said he was yet to receive the notice and that he was prepared to reply to it. “Since I am a DAG, the attorney general should have issued such a notice,” he said. He questioned the basis on which the notice was issued.

“Have I been charged for violating an Indian law? There was no code of conduct we were told to follow.”

Khan noted that he was declared a state guest by the Punjab chief minister (Parkash Singh Badal) and that his mission was to convey a better image of Pakistanis in general and Pashtuns in particular.

“What is constituted as defaming the country – Ajmal Kasab’s alleged killing of Indians or a Pakistani polishing shoes of Hindus, Sikhs and Christians outside their places of worship?” he said. Earlier, Khan had performed voluntary service at a gurdwara in Peshawar. He began going to the gurdwara after Taliban fighters kidnapped and killed some Sikhs in Pakistan’s restive tribal belt.

2012-07-15
SSNews
Previous: Uranium in underground water not due to fertiliser usage ?
Next: Jagir Kaur honours IG in jail