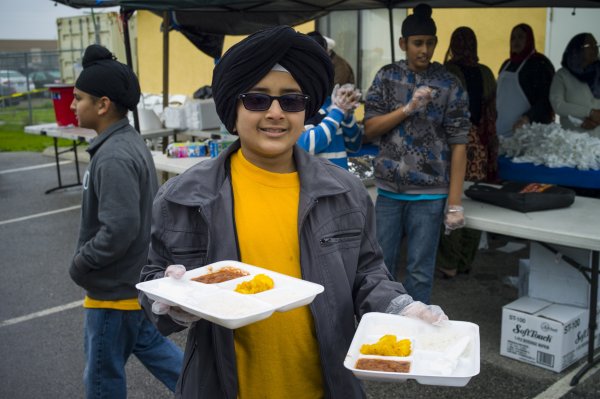 One gave her a bag of beans, rice, pasta and crackers. Another offered her blankets, socks and sweatshirts. And still one more man gave her a sack filled with assorted children’s toys.

They then sent her away with a message:

On a chilly morning when steady rain drenched much of Los Angeles, the Sikh American community offered warm meals and goods to 300 Pacoima families who needed an extra hand this Christmas season.

“We wanted to bring awareness to the people that we are their neighbors,” said Sardbjit Singh, one of the organizers of

Sunday’s event at the Khalsa Care Foundation in Pacoima, which also serves as a Sikh temple or gurdwara.
“We need to come out of our own community and introduce ourselves to others,” he said. “We all come from one God. We are all children of God.”

Each holiday season, the Sikh community takes food and other needed items to the Fred Jordan Mission on Skid Row. But this year, local Sikhs said they wanted to reach out to their own neighbors as part of “seva,” a word that means selfless service to others.

So with the help of principals and teachers at local elementary schools, 300 families were identified as those in need and were invited to the gurdwara for a hot lunch, toy and food donations, and some entertainment.

Singh said part of the decision to host the event locally was because of August’s shooting of six people at the Sikh Temple of Wisconsin in Oak Creek, Wisc., by white supremacist Wade Michael Page. Page’s actions, Singh said, were a result of a misunderstanding of Sikhism and a misplaced image of Sikhs as terrorists.

Sikhism was founded more than 500 years ago and has more than 20 million followers worldwide. It ranks as the world’s fifth-largest religion.

There are three principles, Singh said.

“Always remember God, work hard and honestly, and share your earnings with those who need it,” he said.

“We really wanted the community to get to know who we are,” said Bhajneet Singh, who also worked to organize Sunday’s event. “When that tragedy happened a few months ago, our community didn’t want to act out of anger. We wanted to act out of love. We just want to spread the message of love.”

Bhajneet Singh also said there would be several moments of silence throughout the day on Sunday, to reflect and offer prayers to families following Friday’s shooting in Connecticut, where a gunman killed 26 people, 20 of them children.

Families who came to the event had a hot vegetarian meal of rice, potatoes, beans and Naan bread, plus the bag of gifts.

“What do you think is under the turban?” a woman asked the children.

“Candy!” a boy said, which was followed by laughter from the Sikh crowd.

“This has been a beautiful morning,” said an emotional Viniegra, who left the event with bags of goods and a wide smile from ear to ear.

“We’re very grateful that they would do this for us. God bless them,” the mother of two said. “The food was excellent and it was very nice to learn about another culture. We may be different, but we are all human.”

Gertrudis Martinez said she had learned a little about the people who offered her, her children and husband a warm place to have lunch.

“I’ve read a little about them and it’s not right that they should be called terrorists just because they are from a different country,” Martinez said. “It’s beautiful we can all share each others’ cultures.”

A tearful Margarita Iturbe said she could hardly believe all that had been done for her and her children. Pretty girls and women who wore their hair in long braids, and who were dressed in colorful clothes, had doted on her and her children, offering them more and more food.

And she said she was also grateful to those who gave her the bags of food, blankets and toys

“I’m a single mom,” she said. “If not for them, how could I receive all this? They gave us so much.”