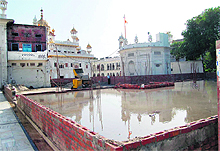 The memorial will come up near Gurdwara Thara Sahib in the Harmandir Sahib complex. The SGPC House had given the green signal to the memorial a decade back and the matter had been hanging fire since then. It was decided to hand over the ‘kar sewa’ of the memorial to Damdami Taksal chief Baba Harnam Singh. Buildings which suffered damage and a ‘bir’ with a bullet mark will also be preserved to commemorate Operation Bluestar.

Sikh scholar Bhai Ashok Singh Bagrian said the memorial should be built in front of Teja Singh Samundari Hall from where the Army had entered into the complex. Others suggested Maharaja Sher Singh Deori, which still bore bullet marks, the ideal place for the memorial.

The SGPC House had passed a resolution to raise the memorial at its meeting on February 20, 2002. A special executive meeting held at Anandpur Sahib on May 27, 2005, under the then SGPC chief, Bibi Jagir Kaur, unanimously resolved to build the memorial. Interestingly, the proposal was virtually shelved in 2008.

Operation Bluestar was ordered by the then Prime Minister Indira Gandhi on June 3-6, 1984, to attack the most holy place for Sikh and ending up killing thousands of innocent pilgrims including Sant Jarnail Singh Ji Khalsa Bhinderanwalay. The Central Sikh Museum has on display a list of 743 persons killed during Operation Bluestar which is dubious figure by many human right organizations.