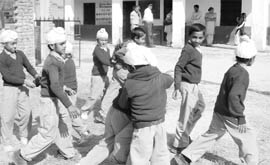 Chandigarh, Punjab: Only 7.2 per cent of the rural students in Punjab reach the college level and even lesser 0.4 per cent of them opt for post-graduation, as per a study conducted by the Punjab Agricultural University, Ludhiana.

The study maintains that there was hardly any difference between the education standard in government and private schools.

The team visited 50 elementary schools for the study and found only 62 per cent of the teachers present on the day of their visit to schools. It was revealed that there were 140 teachers for 250 classes in the 50 schools and that teaching suffered as the teachers were also expected to do administrative duties.

Also, it was revealed that a majority of the students in government schools were from Scheduled Caste families and poor strata of the society. However, on the other hand, children from better off families going to private schools in rural areas were also not faring any better.

During a random test of Class VI students who were asked questions from the syllabus of Class V, only 16 and 31 per cent of the students were able to answer questions in maths and science correctly. In case of private schools, the figure was 3 per cent and 8 per cent, respectively.