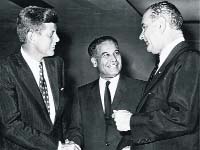 Washington DC, US: US President Barack Obama on Tuesday heaped praise on Punjab-born Dalip Singh Saund, the country’s first Indian-American member of the Congress. In his address at the annual gala of the Asian Pacific American Institute for Congressional Studies, the US President described the late Saund as a “trailblazer”.

“They were trailblazers like Dalip Singh Saund, a young man from India who came to study agriculture in 1920, stayed to become a farmer, and took on the cause of citizenship for all people of South Asian descent,” the President said to applause.

“And once Dalip earned his own citizenship, he stepped up to serve the country he loved-and became the first Asian-American elected to the Congress,” he added.

Saund was born in 1899 in Chhajalwadi village of Punjab. He came to the US in 1920 to study food preservation at the University of California at Berkeley. He eventually switched to mathematics and earned a master degree and a PhD in the subject.

Despite his educational qualifications, Saund took a job as a lettuce farmer since farm labour was the only work South Asians were permitted to do in the US in the 1920s. Indians were also not eligible for US citizenship at that time.

Following an amendment to the law, Saund became a citizen in 1949 and in 1956 was elected as a lawmaker representing California in the Congress, where he served three terms.

Obama noted that many Asian-Americans who first arrived in the US faced hardships, racism and were treated like second-class citizens. “But they didn’t give up. They didn’t make excuses. They kept forging ahead. They kept building up America,” he added.

It was at this point that Obama related the inspiring story of Saund. In the 2008 and 2010 elections, six to eight Asian-American and Pacific Islander candidates ran for seats in the US Congress. This year, the number has tripled to 25 candidates, one running for the Senate and at least two dozen contending for the House.

A record number of Indian-Americans are also running for office this year. Asian-Americans and Pacific Islanders have also seen the fastest and most dramatic increases in their numbers in the past decade, according to the 2010 US Census.

2012-05-11
SSNews
Previous: No divorce clause in Anand Marriage Bill sets off debate
Next: Gatka lads from Tarn Taran make it to Guinness Book