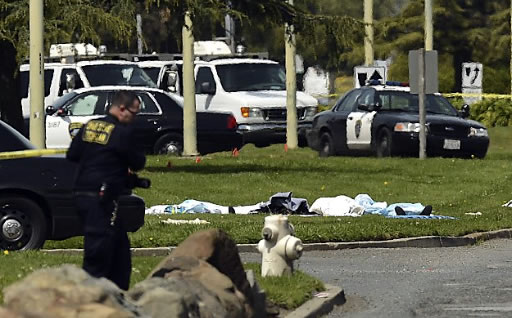 Oakland, California: A quiet Christian college in Oakland became the site of one of the deadliest campus attacks in California history Monday when a disgruntled former student opened fire on his classmates, police say, killing seven people and injuring three.

About an hour after the 10:30 a.m. attack, the suspect calmly walked into a grocery store 5 miles away in Alameda, went to the customer service counter and told employees, “I just shot some people.”

Authorities identified the suspect as 43-year-old One Goh of Oakland, a former nursing student at the school. A police source, who did not wish be identified because of the investigation, told The Chronicle that Goh was embroiled in a dispute with campus officials that may have resulted in him getting kicked out of at least one class.

The source said Goh used a .45-caliber handgun in the attack, spraying a classroom with gunfire and firing additional shots as he ran out.

Student Dechen Yangdon, 27, said she was inside a classroom with eight students and instinctively locked the door and turned out the lights when she heard shots fired at the front of the building.

“I heard our receptionist screaming, ‘Jesus Christ, Jesus Christ, he’s got a gun!’ ” Yangdon said. “After that, she just kept calling for, ‘Help, help help!’… But we were locked inside. We couldn’t help her.”

Yangdon said the shooter tried kicking in the locked door, but resorted to firing four shots before moving on. No one in her classroom was injured, she said.

She said her classmates huddled under desks for 1o minutes before officers arrived and shouted for them to open the door – but they refused.

“We weren’t sure if it was really the police or the guy who just shot people,” Yangdon said.

Paul Singh, 20, of Santa Clara said his sister was among the injured victims who survived the attack.

Singh said his sister, Dawinder Kour, 19, was attending her nursing class when the gunman burst through the door.

“He grabbed a lady that was filing and brought her in and said, ‘Everybody get against the board,’ ” Singh said outside Highland Hospital, where his sister was treated for a gunshot wound to the forearm.

What happened next inside the classroom was not clear, Singh said.

Singh said his sister recognized the shooter as a former student whom she had last seen three months ago after he dropped out of the program.

As the shots rang out, students ran from the vocational college and police scoured the building for the shooter. SWAT units smashed glass windows with sledgehammers to reach students and faculty, who huddled behind locked doors.

In one tense moment, a student was held at gunpoint by police until he was cleared, authorities said.

Oakland Police Chief Howard Jordan said Goh fled the scene in one of the victim’s cars, a Honda Accord. Police caught up with him more than 5 miles away in an Alameda shopping mall an hour and a half after the shooting.

Lisa Resler, 41, was shopping with her 4-year-old daughter when she saw a security guard and Alameda police detain Goh outside the Safeway. She said she thought at first they were arresting a shoplifter.

The man appeared “very sedated” and “looked so out of it,” Resler said. She described him as an Asian male who was wearing a beanie and khaki pants.

“I don’t know why he came here to Alameda,” she said. “I think maybe he wanted to blend in here. My biggest fear is him committing a bigger crime here.”

She said she was shocked to learn that he was suspected in the mass shooting in Oakland.

“I’m really shaken up. My heart’s racing, this is very shocking to me,” she said. “This is scary.”

Angie Johnson, 52, of San Leandro said she was running errands in the industrial complex when she saw a young woman leaving the building with a bloodied right arm and crying, “I’ve been shot, I’ve been shot.”

Johnson said that while she waited for medical attention, the woman told her the shooter was a man in her nursing class who shot one person at point-blank range in the chest before he started spraying the room with bullets.

“She said he looked crazy all the time,” Johnson said the victim told her. “But they never knew how far he would go.”

Johnson said the victim “had a hole in her right arm the size of a silver dollar, with blood coming down.”

According to its website, Oikos is an independent Korean school that offers undergraduate courses in ministry and nursing, among other degrees.