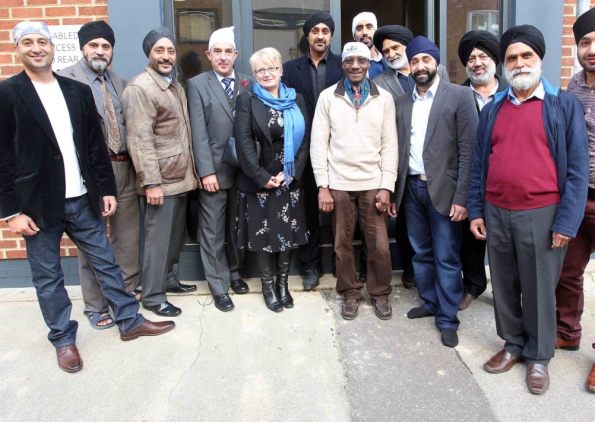 U.K: The official opening of the new Sikh temple in Cromwell Street with Councillors and members of the Sikh community.

A new £700,000 temple in Northampton, which was funded entirely by members of the Sikh community, has been officially opened.

Hundreds of members of the Sikh community attended an event at the temple in Cromwell Street today as well as local dignitaries including Councillor Les Marriott, the deputy mayor of Northampton.

The new temple, which has been built on the site of a former council office building, has a large community space, prayer room, a shop and car park.

Deepinderjet Singh Bassan, deputy president of the Sikh temple committee, said: “It has taken two years to get the money together and make all the renovations we wanted to do to the building.

“A lot of the community have given us loans and the temple has solely been built on community donations.

“We outgrew the old building in Craven Street but this building is fantastic and is three times the size.

“The temple will be open seven times a week and will provide space for activities for the young and elderly Sikh community.”

Am Singh, a member of the temple building committee, said a lot of refurbishments had been carried out to make the building a suitable space to use.

He said: “There is a bomb proof shelter in the basement so the concrete was extremely thick.

“We have also had to completely removed a number of wall partitions.

Previous: Exhibition on 1984 Sikh Genocide seeks justice for victims
Next: AISC to protest outside Rashtarpati Bawan (India) on Oct. 31 against denial of justice to 1984 Genocide victims