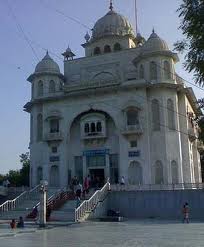 ‘No role in Rakab Ganj violence’

Delhi: Denying that the Delhi Government had any role to play in the violence pertaining to gurdwara politics at Gurdwara Rakab Ganj Sahib here on Thursday, Delhi Gurdwara Election & Gurdwara Administration Minister Arvinder Singh Lovely said over the weekend that the main intention behind the proposed amendment to the Delhi Sikh Gurdwara (Amendment) Bill, 2012, was to remove corruption and horse-trading and make the administration more accountable.

“We were receiving a lot of complaints about corruption in the gurdwara management. It was said that the members of the Delhi Sikh Gurdwara Management Committee [DSGMC] switched loyalties easily in the absence of any anti-defection law. Consequently, the positions of the chairman and other members of various institutions were being compromised. We wanted to clean up the system,” said Mr. Lovely.

He said the Delhi Cabinet had passed the proposed amendment on October 8 as it came under its purview. “The Act was brought by the Delhi Assembly and so it can also be amended only through its approval. So where is the question of interference?” he said.

He said just as chairmen of various bodies and banks are elected directly while members were elected separately, so too the Delhi Government had proposed the introduction of a two-vote system for separate elections for the post of president of DSGMC and its members.

“We want to give the power of election to the people of Delhi. They will be able to elect the DSGMC president as also its members. What is the harm in it? Why is the Shiromani Akali Dal [Badal] leadership so perturbed with this?” Mr. Lovely said.

He said it will be better if SAD leader and Punjab Chief Minister Prakash Singh Badal focused on his State rather than projecting himself as the champion of the cause of Delhi’s Sikhs. “Punjab today is suffering from acute drug addiction. Mr. Badal should eradicate the problems of his State first,” Mr. Lovely said, echoing views expressed by Congress leader Rahul Gandhi at a rally in Punjab recently.

Mr. Lovely’s statements assume significance as the SAD (Badal) has been repeatedly accusing the Congress of interfering in Sikh politics in Delhi. It has also charged that the Delhi Cabinet’s decision to pass the proposal for amending the DSG Bill was motivated by politics.