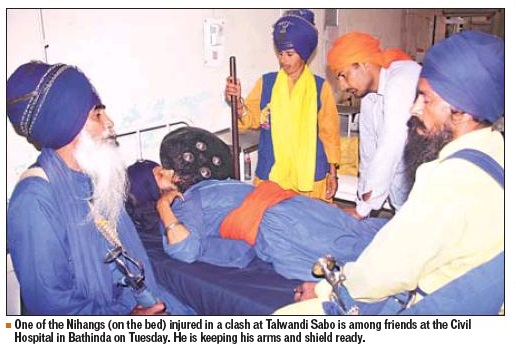 Bathinda, Punjab: Five people were injured in firing during a clash between Nihang groups at Talwandi Sabo.

Members of the Balvir Singh faction opened fire on groups led by Surjit Singh and Joginder Singh to start this battle for 14 acres attached with Gill Dhaba near Dashmesh Public School on the Bathinda road here. The Surjit Singh faction owns the eating joint.

The police claim to be on with investigation. The five people from the Joginder Singh group, who were injured in firing and moved to the Bathinda Civil Hospital, are out of danger. “Harjinder Singh (17), Mahal Singh (40), Sukhwinder Singh Akali (40) of Sangrur, Bahadur Singh, and Jeet Singh (55) are lucky to be alive,” said doctors at the hospital. “The bullets didn’t hit delicate parts of the body.”

On the statement of Bahadur Singh of the Joginder Singh group, the police have lodged charges against 12 suspects. The clash occurred in the morning,” said Paramjit Singh, station house officer of Talwandi Sabo. “We are looking into the cause.”

The suspects, across different groups, are charged under Sections 307 (attempt to murder), 323 (causing injury voluntarily), 148 (armed riot), and 149 (unlawful assembly with common object) of the Indian Penal Code (IPC) and Section 25 (supplying arms to drunken people), of the Arms Act.