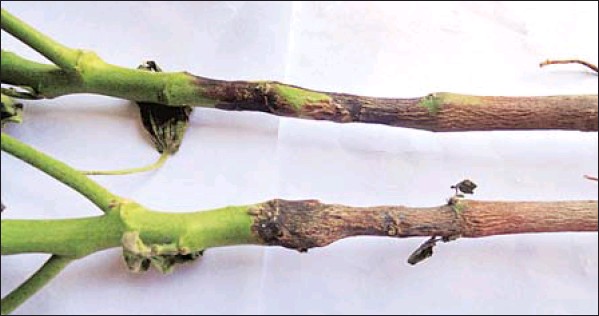 Comments Off on Mystery strangler killing cotton in Bathinda 586 Views

Bathinda, Punjab: The Bt-cotton crop in Punjab is under the suspected attack of a new disease. After more than a year of study, Punjab Agricultural University (PAU) is still unable to tell which enemy is it that turns part of the cotton-plant stem black. The district agriculture department has advised farmers cure for root rots, another disease that starts from roots.

The farmers who noticed stems turning black before the plants went dead asked the district agriculture department for help. The samples of the affected plants are under examination at the PAU. It isn’t the first investigation of these symptoms.

Similar symptoms appeared last year on cotton plants at a village near Abohar. The Central Institute for Cotton Research at Nagpur, Maharashtra, besides the PAU, studied the samples. “Scientists failed to reach any conclusion at that time,” said Jaspal Gill, director of the PAUregional centre in Bathinda. “The suspected new disease was limited to a negligible area but now the symptoms are over more areas of the cotton belt.”

It is still not an epidemic but another headache for sure for cotton farmers. Any new disease means a higher input cost. “We have advised farmers to apply the cure for root rot, if they face this problem,” said district agricultural information officer KK Singla. “In the initial stage, they can try insecticide Baviston on cotton, but if the damage is almost complete, it’s better to uproot and dispose of the plant properly to contain the spread.”

The disease works as if someone had strangulated the stem and blocked the feed to the upper portion of the plant. As in strangulation, the result is death.

Apart from the mystery disease, mealy bug also has taken fancy to the cotton crop, and the treatment advised is the same. Cobalt chloride can help farmers combat parawilt. Some damage to the cotton crop has occurred because of less rainfall in the region.