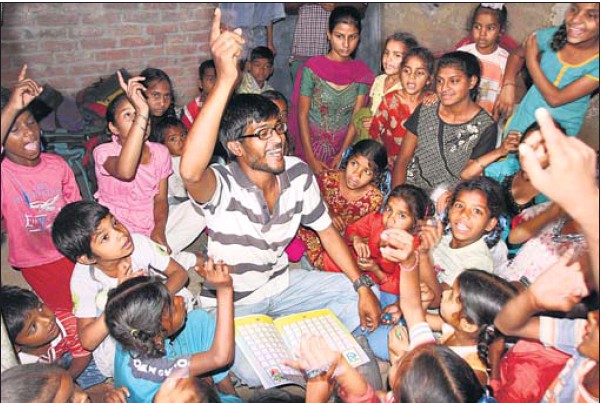 Amritsar, Punjab: Fourteen years ago, 4-yearold Mithun of Nangli village near Amritsar slashed his wrists to blackmail his parents. His demand: to be sent to school to study like his peers instead of to a tea stall to work.

“He was crazy about education. He forced us to send him to school,” says Mithun’s mother Mira Devi. The proud mother says Mithun, 18, the youngest of five siblings, three boys and two girls is the only educated member of the family.

He still remains “crazy” about education. He now teaches about 150 children — most of them wards of migrant labourers like his own parents.

What’s more, he sustains what he calls his Free School by working as a waiter at roadside dhabas earning R6,000 a month, and takes up odd jobs at marriages and parties whenever he falls short of funds. “I pay R1,000 as rent for the accommodation where I hold evening classes and the rest goes towards supporting the education of my students. I have very limited needs of my own,” he says.

His needs may be limited, but Mithun still harbours a burning desire to study further. “I am planning to enrol for a BA.”

Mithun works in the mornings and holds classes in the evenings. “I was born in Bihar where I lived for four years with my parents. My family shifted to Amritsar where my father started working as a rickshaw puller and my mother as a domestic help. Instead of going to school like some of my lucky peers, poverty forced me to work at teashops and roadside eateries. I detested that.”

Mithun insisted on being sent to school, so his parents enrolled him in one where the fee was quite low. “I felt that lady luck had finally smiled on me. However, there were other children my age who were not as lucky. They were wasting their childhood working at roadside eating joints, when they should have been in school. Their parents could not send them to school. I wanted to do something for them. After all, every child has a right to go to school,” says Mithun.

This inspired him to start an evening school for children from financially challenged families in village Nangli of Amritsar in 2008. His first batch was of 10 students.

The students, mostly wards of labourers, are studying in different classes from Nursery to Class 8. “They hail from families that cannot afford to educate them. So I took them under my wings,” says Mithun. Though he started the school all by himself four years ago, he now employs two teachers — both ex-students — who he R800 each.

Sonia, one of the teachers, says, “I love teaching these students, who are quick learners. I am working for self-satisfaction.” That is something she learnt from Mithun.

Komal, a student of Class VII in Mithun’s school, says she wants to be a teacher like her mentor. “Sir has given me a life. Had it not been for him I would have been working somewhere as a domestic help. I want to teach underprivileged students,” she says. Komal’s three siblings also study at Mithun’s school.

Komal’s mother Manjit Kaur does not have words to thank Mithun. “He has given my children the priceless gift of education. Now we can hope for a better life for all of them.”

Mithun nurtures minds and nature, too. He carries a wrench and a few taps every time he steps out of his house. “If he sees an open-ended water pipe, he attaches a tap to it to prevent water wastage,” says his mother.

With his hands full and mind preoccupied, Mithun simply does not have the time and energy to seek financial aid from the government. Mithun is happy being a hero to his students.