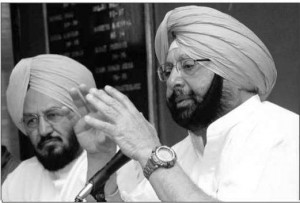 A Times of India (TOI) report says that: “Congress is again raising the issue of Blue Star memorial in Darbar Sahib Complex after the Municipal Corporation elections. But this time it is raising to counter the claim of Punjab Deputy Chief Minister Sukhbir Singh Badal that SAD-BJP government would be able to get one lakh crore investment in the state.”

Punjab Pardesh Congress Committee (PPCC) President Captain Amarinder Singh has said that while on one side Deputy Chief Minister, Sukhbir Badal, was announcing to bring in investment but the conditions in Punjab being created by SAD-BJP regime were far from suitable for attracting investment.

“Raising of Blue Star memorial is one such step which does not reflect that state government was ensuring stability in state,” Amrinder is quoted to have said by TOI while answering queries from media here on Tuesday.

Asked that noting adverse has happened due to the memorial Amarinder argued that there was underlying fear in the people due to it. “It is not good for peace in the state and would cause disillusionment in the investors,” he held. “Badal has been doing various things since 1978 which disturbed peace in state and harmed the stability,’ Amarinder alleged.

He went further to say that the memorial was not only against the interests of Punjab but was also not in consonance with Sikh tradition.

“Earlier also there were attacks on Darbar Sahib during Moughal period but no separate memorial was erected within the precincts of Darbar Sahib Complex. Any memorial should be raised outside the complex” he claimed.

“What is the logic even according to the Sikh traditions to have another Gurudwara (as SGPC and SAD have said that ithe memorial would be only a Gurudwara) within the holiest shrine of the Sikhs,” Amarinder argued.

“If any memorial needs to be built then it should be for people also who were killed in Punjab during terrorism. Let it be a common memorial outside” he said.

Capitan Amrinder Singh’s claims and opposition regarding place and form of memorial is unfounded. Either he is totally ignorant of Sikh history or he is deliberately lying to show his loyalty to Delhi.

To counter such lies, historians shows that many such memorials were erected within the complex of Sri Darbar Sahib in the memory of those who laid their lives during attacks on Darbar Sahib during Mughal period. There is Shaheed Ganj (a Gurudwara) memorial of Baba Deep Singh Ji is located within the Darbar Sahib complex on Sikh reference library side.

Similarly, another Shaheed Ganj (a Gurudwara) memorial is located on the backside of Sri Akal Takhat Sahib, with in Darbar Sahib Complex, in the memory of Baba Gurbax Singh Nihang who defended Darbar Sahib from armed attack by Ahmed Shah Abdali.

A memorial is situated near Lachi Ber, near Darshani Deodi of Darbar Sahib in the memory of Bhai Sukha Singh and Bhai Mehtab Singh who beheaded Massa Ranghar. Massa Ranghar, the cruel mughal ruler who filled the Amrit Sarowar with waste and did many misdeeds against the honour of Sri Darbar Sahib.

There is a historic traditions among Sikhs to built the memorials and it is further notable that previous memorials in Darbar Sahib complex are also in form of Gurudwaras.

Amrinder and Sikhs, in recent years:

It is notable that in previous years, especially during his term as Chief Minister of Punjab (2002-2007) Amrinder Singh was able to build an impression as a radical leader within the Congress party, who was bold enough in supporting the Sikh cause to a certain extent.

During one of his trips to Canada he delivered a speech from a stage where the banner of “Khalistan Zindabad” was hanging in the background.

During a debate in Punjab assembly he called Bhai Jagtar Singh Hawara as “a gentleman”.

Moreover Punjab Termination of Agreements Act, 2004 – terminating all illegal water sharing accords, that was passed during his term as Chief minister of Punjab, was celebrated as a historic step for the betterment of Punjab; whereas in reality this law legalized the allocation of Punjab river water to non-riparian states of Haryana, Rajasthan and Delhi and thus was against the interests of Punjab.

But with his recent opposition to the Sikh memorial his impression as a pro-Sikh leader is shattered away.