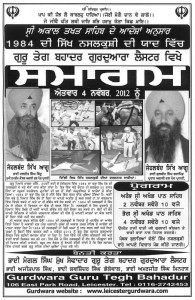 Leicester,UK: It is learnt that a Sikh Genocide memorial conference shall be organized at Gurudwara Guru Teg Bahaudur Sahib in Leicester, UK to observe 28th anniversary of “Sikh Genocide 1984”.

It is notable that in the first week June 1984 various Sikh Gurudwaras were attacked by Indian army and thousands of pilgrims were killed and in the first week of November 1984 thousands of Sikhs were brutally massacred in a genocidal violence unleashed by Indian regime on Sikh population throughout India.A poster recently released by the organizers of November 4 conference reads: “In the history of 20th century the year of 1984 is remembered as the year of Sikh genocide. In this years near-about 50 thousand Sikhs were collectively massacred on the orders of the largest democracy on the earth. The year of 1984 is stuck in the chest of Sikhs as a knife”.

“The purpose of this conference is to remembered the victims as per the directive of Sri Akal Takhat Sahib, commanding the Sikh Panth to observe the Sikh Genocide 1984 day and to develop a general & common understanding towards various aspects related to Sikh Genocide 1984”, Bhai Mangal Singh, President of the Guru Teg Bahadur Gurudawara Sahib informed.He appealed to the Sikh sangat to participate in this conference.

Previous: 1984 survivors: The sikh people that time forgot
Next: Hurricane Sandy – Sikhs working with other agencies in relief operation