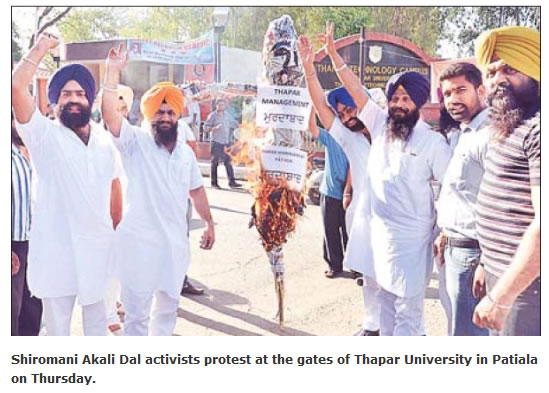 Patiala, Punjab: Facing flak after abolishing the 50% quota for students of Punjab, Thapar University has now come up with a fresh argument to defend its decision. It says the move was necessary as the quality of students from Punjab was significantly lower when compared to other states.

When newspapers reported the abolishment of the quota, the university had cited orders of the University Grants Commission as the reason.

But on Thursday evening, it issued a statement that read, “The gap between the All Indian Engineering Entrance Examinations (AIEEE) ranks of students from Punjab and outside is widening rapidly. Of late, it has reached a situation where we may not have enough qualifying candidates to fill our seats through the domicile quota.”

It also took the plea that while the original decision to have a quota for Punjab was due to the limited number of engineering course seats in the state, the situation had since changed a lot. “Today, there are many engineering colleges in the state… hardly any dearth of opportunities for students from the state,” the university said.

“We are a private, deemed university that does not receive government funding… other [such] institutes have an all India basis for admission and enjoy an advantage in recruiting higher ranked students. By making admissions equally competitive for all students, we hope to garner some of the best engineering students in the country,” the university explained further.

The university’s director, Abhijit Mukherjee, and registrar NK Verma had earlier told told to the press that the UGC guidelines were the only reason behind abolishing the 50% quota.

In the Thursday statement, the university sought to take on criticism with an elaborate argument that further read, “The courses on offer at TU, especially the engineering courses, are much sought after. So removal of domicile quota will give a fair opportunity to meritorious students (from the state and outside) to compete for admissions.”

“Throwing open all seats for national competition will certainly improve the students’ profile at TU and improve the institute’s ranking,” it said, adding that the abolishment of the Punjab domicile quota “will also ensure that no seat goes vacant, especially since engineering is such a coveted subject”.

Opposing the move of Thapar University to abolish the 50% quota for Punjab’s students, Shiromani Akali Dal (SAD) leaders on Thursday staged dharna outside the campus and burnt the effigy of the university management. The workers led by the state organisation secretary of the party, Ranjit Singh Nikra, alleged that the varsity’s move of abolishing quota would reduce the opportunities for students from the state.

“We will not tolerate any such move of the varsity and will urge the state government to intervene immediately,” Nikra said while addressing the workers.

He also questioned state Congress president Capt Amarinder Singh, who happens to be a trustee of the university, “Why he is mum now?

Harpreet Wahi, general secretary of Youth Akali Dal, said that after “using up all the grants from the state and 250 acres of land”, the decision of the varsity to abolish the quota was “anti State”.

Previous: Sikhs to have own law for registering marriages – Anand Karaj Act
Next: Martyrs – First International Production on Sikh History