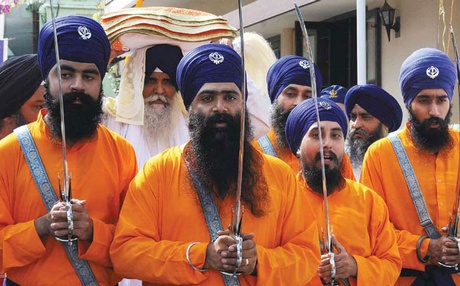 Comments Off on Kochi Gurudwara: Sikhs take out procession 539 Views

The rally which started from Thevara continued through Panampilly Nagar till Ravipuram. Express photo

Kochi, India: As part of the golden jubilee celebrations of the Kochi Gurudwara at Thevara, nearly 1,000 Sikhs from various parts of the city and certain parts of the country took out a procession on Sunday.

The sound of the kirtan filled the air with over 100 devotees, who arrived from the Sikh spiritual headquarters at Amritsar, performing instruments in praise of their Lord.

The rally which started from Thevara continued through Panampilly Nagar till Ravipuram.  The rally returned to the Gurudwara by evening.  In accordance to their traditional celebration, Guru Grandh Sahib, the holy book of the Sikhs, was carried by the devotees in the rally.

Following the people who held the book were those who chanted the kirtans. Both men and women took part in the performance. The blue-turbaned Sikhs clad in saffron attire also held gatka (swords).

Over 70 persons from Coimbatore and 50 persons from Thiruvananthapuram were also present. The jubilee celebrations will continue till November 28, the birthday of the Guru Nanak, which will be celebrated in piety.