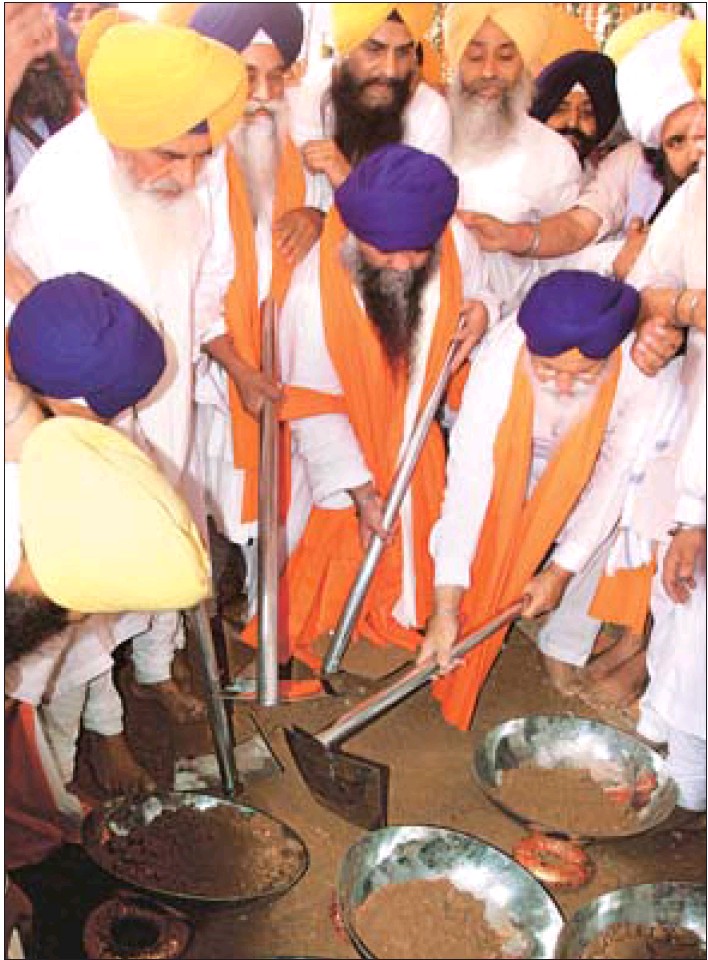 Amritsar, Punjab: The kar sewa (voluntary service) for erecting a memorial for those Sikhs who died fighting to protect Saachkhand Sri Harmander Sahib. Leaders of the ruling SAD were not present during the three-hour ceremony held during the 28th anniversary of Operation Bluestar, which falls on June 6.

After performing the ‘bhog’ of ‘akhand path’ at Akal Takht, jathedar Giani Gurbachan Singh dug out the soil with a silver spade at the spot where the memorial is to be erected, to symbolise the commencement of the ‘kar sewa’. Simultaneously, Takht Kesgarh Sahib jathedar Giani Tirlochan Singh, Takht Damdama Sahib jathedar Balwant Singh Nandgarh, SGPC chief Avtar Singh Makkar and Damdami Taksal head Baba Harnam Singh Dhuma also dug out a small portion of the soil with silver spades.

Many others performed sewa included Baba Kashmir Singh Bhurewale; Baba Avtar Singh Bhidi Chand; Tirlochan Singh, son of former All India Sikh Students Federation chief Amrik Singh, who became shaheed during operation Bluestar; Ishar Singh, son of former Taksal chief Sant Jarnail Singh Ji Bhindrawale, who too was killed during the operation; and SGPC executive member Rajinder Singh Mehta, who was nabbed by security forces during the operation and was later lodged in the Jodhpur jail along with others who were taken into custody from the shrine.

Keeping in view the Sikh traditions, no foundation stone was laid at the spot and no one has been credited with the ‘kar sewa’. There was some opposition to the handing over of the ‘kar sewa’ to Dhuma by groups like the SAD(A) led by Simranjit Singh Mann, who did not attend the function.

Funds and Shape of Memorial

The funds for the memorial will come from the community and for this the SGPC chief has appealed to all Sikhs to donate liberally. But Makkar made it clear that no donation box would be put up in the shrine for collection of funds. Those wishing to donate would do so directly to the Taksal headquarters or to Baba Dhuma.

The Taksal chief, when asked about the shape of the memorial, said the decision in this regard was yet to be finalised. He refused to commit himself on the reports that it would be in the shape of a gurdwara or would be in some other form or shape.

While SGPC secretary Dalmegh Singh said it would be in the shape of a gurdwara, Makkar stated that the SGPC executive would take a final decision in this regard.

Asked if the SGPC would chip in with funds, Dalmegh said, “There will be no need for that as funds have already started pouring in from the public.”

No timeframe has been fixed for completion of the memorial, but the Akal Takht head told reporters that it would be completed in the shortest possible time.