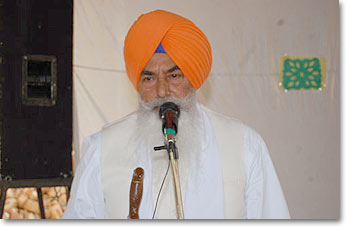 DECLARE NOW WHICH CANDIDATES YOU SUPPORTED OR DON’T CLAIM CREDIT AFTERWARDS: DAMDAMA SAHIB HIGH PRIEST TO RAM RAHIM. He has challenged the dera to be frank.

Bathinda, Punjab: Balwant Singh Nandgarh, high priest of Damdama Sahib, one of the five takhts (holy seats) of Sikhs, has dared Gurmeet Ram Rahim Singh, head of the controversial Dera Sacha Sauda, to declare openly which candidates his sect had supported on the election day in Punjab.

“If the Dera is confident about its political power, it should not indulge in closed-door tactics to shut the criminal cases against its head,“ said Nandgarh. “The dera should announce its political support and demands openly.“

Nandragh was at Gurdwara Haji Rattan on Sunday in Bathinda to speak against drug addiction and female foeticide.
“The next time,“ he said, “The dera should be frank about it favourite candidates so that the public can decide whom to oppose in the elections. We will oppose whoever gets support from the dera.“

Dera’s frankness, Nandgarh told the media, would also help pundits measure its political mileage and Sikh vote bank. The dera had been promoted in the state only to subvert the Sikh issues, he said, adding that Sikh vote bank had become a smaller factor.

“Sikh organisations should also mobilise members of the community to wrest political power back,“ said the high priest. “Cases of rape and murder are pending against the dera head. The lack of any substantial information about the dera’s influence has allowed it to blackmail political parties and exploit its followers.“

After the elections are done, the dera would claim the false credit of supporting the victorious candidates, said Nandgarh.
“The motive of not announcing support can only be to save its head from law,“ he added, charging the dera with applying pressure on the Central Bureau of Investigation (CBI) and other agencies of the government.

The high priest wants the election commission to act against the deras influencing the free choice of their followers. “The conduct of Sirsa’s dera violates the right to vote,“ he said.
“The EC should also save the rights of the voters who visit the dera.“

Nandgarh said he suspected a conspiracy behind the move of the Punjab police to produce a fake affidavit, as alleged, to close the investigation against Gurmeet Ram Rahim Singh in a case of hurting the religious sentiments of Sikhs in 2007 by wearing an attire similar to that of the 10th Guru.

Rajinder Singh Sidhu, man who has charged the police with producing the fake affidavit in court, was present at Gurdwara Haji Rattan. “Every Sikh will support Sidhu in winning the case against the dera head,“ said the high priest of Takht Damdama Sahib. “Either the Punjab government or the Punjab police are trying to save the dera head.“

If the takht had any proof that chief minister Parkash Singh Badal and deputy CM Sukhbir Singh Badal had either visited the dera head or sought support from him in violation of Akal Takht edict, it could take action against both leaders, Nandgarh suggested. Nandgarh accepted that he had not much support from the high priest of Akal Takht to enforce the 2007 edict against the Sirsa dera.