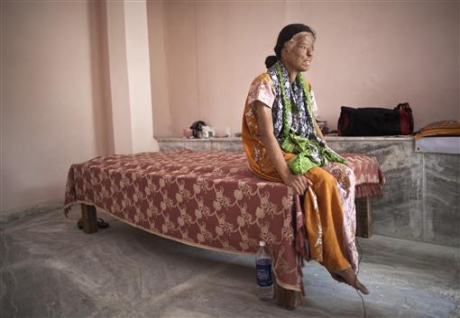 Delhi, India:  They came in the dead of night, broke into her home as she slept and poured a cocktail of acids over her face; burning her skin, melting her eyelids, nose, mouth and ears, and leaving her partially deaf and almost blind.

Her crime? She had spurned their sexual advances.

Nine years on, Sonali Mukherjee, 27, is appealing to the Indian government for medical support for skin reconstructive surgery as well as tougher penalties on her three assailants, who were released on bail after only three years in prison.

Either that, she says, or authorities should give her the right to kill herself. Euthanasia is illegal in India.

“For the last nine years, I am suffering … living without hope, without future. If I don’t have justice or my health, my only way out is to die,” she says, sitting on a bed in a sparsely furnished room above a Sikh temple in south Delhi.

Sonali’s desperate plea highlights the heinous crime of throwing acid on women in India, the lack of support for victims, and lax laws which have allowed attackers to get away with what activists say is the equivalent of murder.

Acid violence – where acid is intentionally thrown to maim, disfigure or blind – occurs in many countries across the world, and is most common in Cambodia, as well as Bangladesh, Pakistan, Afghanistan and India where deep-rooted patriarchy persists.

Around 1,500 acid attacks are reported globally each year, with 80 percent of them on women, says London-based charity, Acid Survivors Trust International, adding this is a gross under-estimate as most victims are scared to speak out.

There is no official statistics for India, but a study conducted by Cornell University in January 2011 said there were 153 attacks reported in the media from 1999 to 2010.

Many of these attacks, said the study, are acts of revenge because a woman spurns sexual advances or rejects a marriage proposal.

“These men feel so insulted that a woman could turn them down and have an attitude of ‘If I can’t have you, no one can’,” says Sushma Kapoor, deputy director for UN Women in South Asia.

With a bright future ahead of her, Sonali was a 17-year-old sociology student in the city of Dhanbad in India’s central state of Jharkhand when the attack happened back in April 2003.

The three men were her neighbours and harass ed her as she left for college every morning. When she threatened to call the police, they took revenge, leaving her with 70 percent burns to her face, neck and arms.

An Indian court handed down nine-year jail terms to each of her attackers. But within three years, the men were out on bail. Her appeal against their release has yielded little results, says Sonali, and she continues to worry about her safety.

Unlike countries like Pakistan and Bangladesh, where acid violence has in recent years been listed as a specific offence, India still categorises it as grievous hurt, dolling out penalties which are lenient and jail-terms which are bailable.

“The actual attack is just the start of a life of suffering. Most are disfigured and blind. They face years of physical and mental pain and need rehabilitation,” says Sushma Varma, founder of the Campaign and Struggle Against Acid Attacks on Women (CSAAAW), a Bangalore-based voluntary group.

“In most cases there is no help, no support, no money.”

With a rising number of reports of such attacks, the cabinet this month approved a proposal to make acid attacks a separate offence, making it punishable by 10 years imprisonment and a fine of up to 10 lakh rupees ($180,000). This will now have to be approved by parliament.

But victims and activists say the government must also look at regulating the sale of locally produced household cleaners, which contain highly concentrated acids, that are easily and cheaply available in local markets across the country.

Acids are increasingly being used as weapons, like guns, they say, but there are no licensing laws for those who sell and purchase these deadly chemicals which also include neat hydrochloric and sulphuric acids.

“You can buy highly concentrated chemicals like those used on me in most markets for less than 50 rupees a bottle,” says Sonali. “This is enough to ruin a woman’s life. They may not have killed me, but I might as well be dead.”