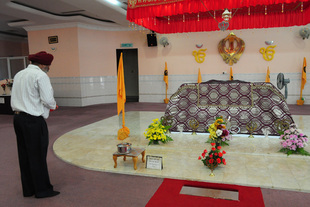 In Malaysia, a Sikh temple stands as a place of fellowship

Malaysia:The gurdwara, the largest in Southeast Asia, offers a variety of services, as well as tranquillity and togetherness, to local Sikhs and people from other faiths.

t is lunch time and Rajinder Kaur, 66, is eating a vegetarian meal of polao, bean curd and lentil gravy in the dining hall of Gurdwara Tatt Khalsa Diwan. Lunch is free and everyone, regardless of religion, race or social class, is welcome. About 200 people turn up each day. On festival days, the hall may host up to 1,000 diners.But Rajinder is not here for free food.After losing her husband to a heart attack nine years ago, she has come to the largest Sikh temple in Southeast Asia to seek peace. Rajinder’s late husband used to volunteer in the kitchen.”In an age where everyone is thinking of making money, this is the only place where I can feel calm and unhurried,” says Rajinder.

Jeswant Singh Sran, security chief of the gurdwara car park, has held his post for ten years. He sponsors tea for morning prayers between 5 and 7am, makes sure the area is free of drug addicts, and greets visitors with puns.

“I am the ‘only Singh in the world’, hence my name, Jeswant. And what does a guy who likes to cool himself in a deep pool of water call himself? Kuldeep,” quips the retired police officer.

Jeswant points out three other gurdwaras located within a five-kilometre radius, including one at the police academy in Jalan Semarak, and another at the Jalan Bandar police station.

“Many first-generation Sikhs were recruited in the armed forces. The presence of these gurdwaras kept them steadfast to their duty,” says Jeswant, who joined the forces in his youth.

Standing like a sentinel on the border of the Chow Kit market Kampung Baru, the gurdwara is a beacon to the Sikh community, both local and foreign. Foreign workers employed in area businesses comprise 30% of the congregation. They come to volunteer and find comfort in their brethren’s company.The roots of the gurdwara can be traced back to 1819, to its original site where the Kuala Lumpur General Hospital now stands.

According to Sujit Singh Gill, 80, treasurer of the gurdwara for nine years, the British government officially allocated the lot for the Sikh community in Jalan Raja Alang in 1922.

Originally serving the Sikh community from the Setapak and Sentul area during the 1920s, the congregation grew to include businessmen who worked in Jalan Tuanku Abdul Rahman in the 1960s.

The Malaya Samachar newspaper, printed entirely in Punjabi thrice weekly, with a run of 500 copies per issue, is housed in the complex.

Fifteen rooms are available to house the needy or budget travellers on a temporary basis, but the gurdwara committee is careful whom they accommodate for safety purposes.

The construction of the temple’s two buildings, standing on 1.5 acres of land in the middle of a prime commercial area, was fully funded by gurdwara members.”It is the members who have ensured the survival of the gurdwara thus far,” said Sujit, who added that they have 600 lifetime members who contribute RM 100 ($33) to the gurdwara fund annually.Still, Sujit, the treasurer, feels the gurdwara has seen better days.A religious school had some 500 students and 20 teachers in the 1970s but had to close due to lack of students. Snarling city traffic, changing five-minute journeys to two-hour crawls, has made it impossible for students to reach school on time.

Gurdip Singh, Sujit’s assistant, said it’s all about the changing times. But while things may be quiet on weekdays, the complex bustles on weekends. On Sundays, children come for religious classes, yoga and music lessons.

“People still come here to pray in the mornings and evenings. We still have our festivals. Our monthly schedules have few free days and we still cater to community needs like marriage ceremonies and requiem. That is a good sign,” Gurdip said.