JK Rowling did ‘vast research’ on Sikhism for ‘The Casual Vacancy’ 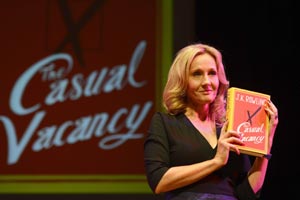 Celebrated author JK Rowling, whose latest book has a Sikh family at the heart of a fictional village in south-west England called Pagford, says she did a “vast amount of research” on Sikhism – and it shows in the book titled ‘The Casual Vacancy.’

Answering questions from journalists and others at a book-reading event at the Southbank Centre here last night, Rowling, 47, said that when she was in her mid-twenties she knew a Sikh woman who sparked her interest in Sikhism.

It remained with her all along, so the only non-white family in the book “had to be Sikhs”, she said.

Rowling said she was particularly struck by the egalitarian principles of the religion, and wove in a Sikh family as one of the central features of the book published by Little, Brown Book Group.

“I wanted the Sikh family at the heart of Pagford, and I wanted them to be second generation Britons. So they are insiders and outsiders simultaneously. In the book, it is Sikhism that provides religious morality, not the Church of England, which is represented by an empty church,” Rowling said.

Early Indian-origin readers of the book released yesterday morning said they were impressed by the way the Sikh family and Sikhism had been treated in the book.

London-based media consultant Mimmy Jain, who grew up in Punjab, said: “I was happily surprised to find that JK Rowling had done her research pretty well. There are no Hindu-Muslim or North-South name mismatches of the kind that make me shudder in the work of most Western authors who want to add a bit of curry to their books.”

She added: “I liked her treatment of Sukhwinder, the only one in a high achieving family who is stuck because she is dyslexic.

Of course, it’s the parts about the kids – all of them – that really stand out in the book.”

The book has received mixed early reviews, while the jury is out whether Rowling has succeeded in switching from the literary genre of children books to a novel explicitly marketed as one for adults.

She said she welcomed legitimate criticism, but it all “depends on who is writing the reviews.”

The book contains several expletives that Rowling read out at the second reading at the packed Southbank event.

She described the book as a tragic comedy.

Tagged with: JK Rowling did on Sikhism for 'The Casual Vacancy'