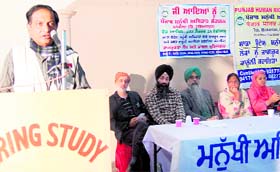 Amritsar, Punjab : Various human rights organisations that are fighting against violations by paramilitary forces and police in different states today came together and passed a resolution for abolition of capital punishment, stopping misuse of sedition laws and setting up of independent tribunals for free and fair probe into such cases.

The resolution was passed in a conference on ‘Human rights and laws’ organised by the Khalra Mission Organisation here. Prominent among those who attended the conference was human rights activist from Chhattisgarh Binayak Sen.

Giving an example of his own case, he said he was a pediatrician and had been working in the tribal belt. “I raised my voice for the rights of tribals, but was booked under sedition laws,” he said.

Sen was released following the directions of the Supreme Court.

Parveen Hangar from the Association of Parents of Disappeared Persons, Kashmir, alleged that over 10,000 persons, most of them youth, had “disappeared” in Srinagar alone. She revealed that her own son Javed Hamid Hangar had been missing since August 18, 1990.

Advocate Navkiran Singh from Lawyers for Human Rights, advocate Colling Gonzalves from Human Rights Law Network and advocate RS Bains from Punjab Human Rights Organisation demanded that the capital punishment should be abolished in India and said the prisoners should instead be given an opportunity to reform themselves.

“Death penalty is being awarded for killing a VIP, but those involved in murder of a common man are being given some other sentence,” they said. They alleged that there were political interests behind decisions being taken on mercy petitions. They also spoke against hanging 26/11 convict Ajmal Kasab while saying that he should have been given a chance to reform.