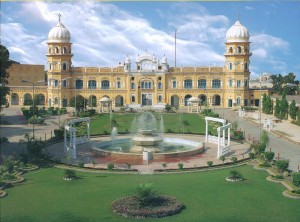 It is notable that Nankana Sahib is one of the most revered pilgrimage destinations for Sikhs around the world.

The announcement was reportedly made by Pakistan’s interior minister Rehman Malik at a dinner hosted recently for a delegation of Indian lawyers, comprising bar representatives, at a hotel in Pakistan.While announcing the decision, Rehman Malik reportedly said that the move to make Nankana Sahib a holy city was a “goodwill gesture” towards Sikhs in India as well as members of the community settled in other parts of the world.

According to Daily Mail (UK) “The decision came in the wake of a demand by the community to accord the historical city, which houses a shrine in Guru Nanak Dev’s memory, a holy status”.

Rehman Malik also made an announcement that now onwards persons with Indian passports visiting Pakistan could travel to Nankana Sahib irrespective of the kind of visa they had been granted, witch means that tourists from India with a visa to visit a particular city could nonetheless travel to Nankana Sahib, without seeking a separate visa.