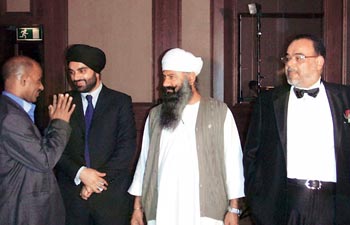 New Delhi,India: A day after the BJP accused the Delhi government of favouring Hardeep Singh Chadha in allocation of a contract to run buses in the city, an umbrella body of the city’s gurdwaras condemned the allegations.

BJP state president Vijender Gupta had written to Police Commissioner Neeraj Kumar demanding a thorough probe into the shootout, in which Hardeep and his brother Gurdeep Singh Chadha alias Ponty were killed.

Gupta alleged that Delhi Minister Arvinder Singh Lovely had helped Hardeep bag contracts for operating buses in the Capital when he was the Transport minister.

Gupta claimed Hardeep was involved in gurdwara politics in Delhi because his father-in-law, Harinder Singh, is the younger brother of Paramjeet Singh Sarna.

Sarna, president of the Delhi Sikh Gurdwara Management Committee, on Wednesday said Gupta was trying to gain political mileage by making such allegations.

In a press statement, he said Gupta’s statement amounted to “direct interference in the religious and gurdwara affairs to help their political ally Shiromani Akali Dal and gain political footage in the Delhi Sikh Gurdwara Management Committee”.

Sarna said the BJP’s motives were dictated by its fear of defeat in the upcoming DSGMC elections after having already lost in the previous two elections.

“Sikhs are not going to tolerate any interference of BJP, which is even against the independent identity of Sikh religion. Their pretext to drag the family of our close relatives in their nefarious attempt is extremely condemnable,” Sarna’s statement read.

While Gupta alleged police were not investigating the case “seriously and thoroughly”, the Delhi government on Tuesday rejected the charges of any wrongdoing.

Gupta alleged that Hardeep’s company — AB Grain Spirits Pvt Ltd — was awarded a contract to operate 150 low-floor buses in South Delhi, but only 16 buses were plying on these routes.

He said Hardeep had secured the contract of this cluster service due to his relations with the Delhi government, and close links with Lovely, the then Transport minister.

A government statement on Tuesday said the bus clusters were awarded through an open, transparent and competitive bidding process. “Those who qualified the technical criteria and quoted the lowest were approved,” the release said.

Another communique from the DIMTS called the accusations baseless and contrary to facts.

“It is on record that as much as Rs 1.08 crore have already been imposed on AB Grain Spirits Pvt Ltd as penalty (performance shortfall deductions),” the statement read.

Previous: Sikh community locks horns with Censor Board of India over use of ‘Raj Karega Khalsa’
Next: Sikh family looted near Nankana Sahib