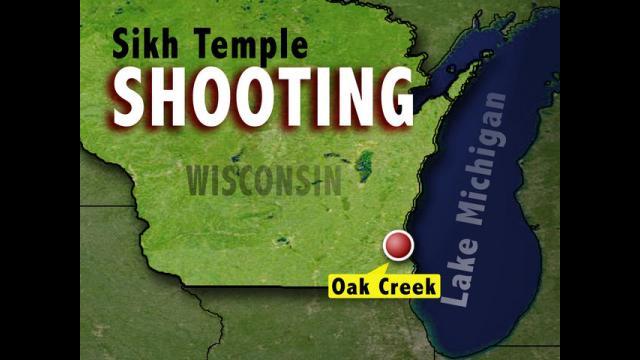 (CNN) — At least seven people, including a gunman shot by a police officer, have been killed in an attack on worshippers at a Sikh temple in the Milwaukee suburb of Oak Creek, Wisconsin, on Sunday, police said.

The officer was wounded but “returned fire, and that shooter was put down,” said Bradley Wentlandt, the police chief in nearby Greenfield, who briefed reporters. Investigators who picked through the building afterward found four bodies inside the temple and two other victims outside, plus the gunman, Wentlandt said.

Though early reports had suggested there may have been more than one attacker, he said officers had not identified any other gunmen.

The wounded officer, a 20-year veteran, was in surgery Sunday afternoon after being shot multiple times, but was expected to survive, Wentlandt said. He was sent to the Sikh Temple of Wisconsin in Oak Creek, south of Milwaukee, after a 911 call about 10:25 a.m. (11:25 a.m. ET).

Carolyn Bellin, a spokeswoman for Milwaukee’s Froedtert Hospital, said one of three men brought there from the incident was in surgery early Sunday morning, while another was in the surgical intensive care unit. The third was being evaluated in the emergency room. All three were in critical condition.

The temple has a congregation of 250 to 400, according to its website.

“I just want to say this temple was built a number of years ago and there have never been any problems with this temple,” Oak Creek Alderman Dan Jakubczyk said. “They’ve been a plus to this city and to my district.”

CNN’s Marlena Baldacci and Matt Smith contributed to this report.