Give my mother at least the dignity of being a statistic 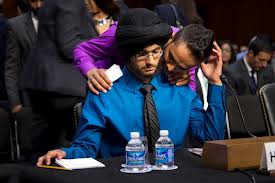 Washington:USA,The son of a Wisconsin gudwara massacre victim has asked the US administration to begin collecting statistics on hate crimes against Sikhs.

Harpreet Singh Saini, 18, told a Senate hearing he wanted to give his late mother “the dignity of being a statistic.”

Saini’s mother, Paramjit Kaur, was among six people killed and four wounded by a gunman on August 5 before a service was to begin at the gurdwara. The shooter, Wade Michael Page, was later shot.

More than 400 people, many of them Sikhs, attended the hearing.

Senator Richard Durbin, chairman of the Judiciary subcommittee, said he supported Saini’s request and told the Justice Department that the government was moving too slowly on requests for the data collection. He noted that Sikh community has been asking for these statistics for last two years.

Roy Austin Jr, an official of the department’s civil rights division, said the agency will bring together a wide array of religious groups in October and make recommendations to the FBI on whether the data collection should be expanded to include hate crimes against Sikhs.

“The Department of Justice has heard this concern,” he said. “We are going to take action.”

Saini, a college freshman, said he was 10 years old when his parents brought him and his brother to the United States in 2004. “This was not supposed to be our American story,” he said. “This was not my mother’s dream.”

In an emotional testimony Saini said that two days after his mother died, he and his brother ate the leftovers of the last meal she had made.

“I just had my first day of college. And my mother wasn’t there to send me off,” Saini said, while questioning why the government never took action against Page, the shooter, because groups concerned with hate crimes had him on their watch lists.

Durbin asked an FBI witness, counter-intelligence official Michael Clancy, “Was there a breakdown in intelligence here? Were there any warnings to the Sikh community?”

Clancy responded that the FBI had no information that Page posed a threat to any group.