Female Sikh laughs off cruel taunts about her facial hair

London:UK, A Sikh US student’s dignified response to a tasteless post making fun of her facial hair has earned her a legion of fans.

A man took a photo of Balpreet Kaur and uploaded onto Reddit in the ‘funny’ category with the tagline ‘im (sic) not sure what to conclude from this’, Daily Mail reported on Wednesday.

The aspiring neurosurgeon discovered the picture – which shows her standing in a queue – and, instead of flying into a rage at the person behind the cheap dig, she posted a comment explaining why she didn’t remove her hair.

Ms Balpreet, an Ohio State University student, said, “I’m not embarrassed or even humiliated by the attention [negative and positive] that this picture is getting because, it’s who I am.

“Yes, I’m a baptised Sikh woman with facial hair. Yes, I realise that my gender is often confused and I look different than most women.”

She refused to attack the person who had posted the photo, which many viewers accused of being mean and deliberately trying to draw laughs at Ms Balpreet’s expense.

Ms Balpreet said to the original poster that if he had wanted a picture he should have just asked and she would have smiled, and invited people to say hello if they saw her on the University campus.

Her eloquent response to the person behind the picture drew her an army of fans, who called her an ‘inspiration’ and ‘awesome’.

Some wrote to her to express their concern that her body hair might be a sign of polycystic ovary syndrome, which can prompt excessive body hair in the patient.

But, again, the student replied to their responses, assuring them her doctor had said it was just her hormones.

“I’ve been to the doctor regarding this and it’s just a side effect of my hormone levels during my teenage years.

“The hormones have returned to normal but the hair is still there. That’s fine :) I don’t regret anything nor do I view it as an unfortunate thing.”

The Reddit user who posted the picture was branded ‘shallow’ and ‘rude’ for posting her picture.

He then responded apologising for his behaviour. 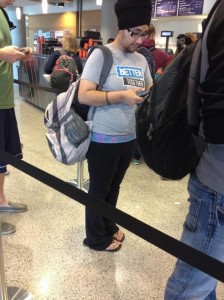