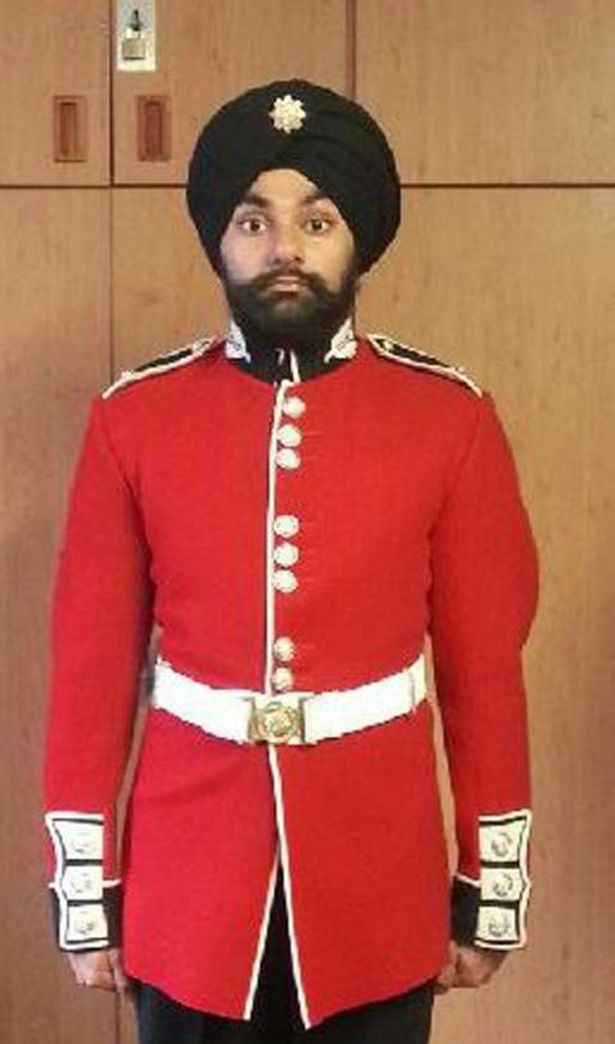 London,UK:- “Thousands of Sikhs have fought and died for the UK. They never gave up their turbans so why can’t a Sikh soldier guard the Queen while wearing his?”

The family of a Birmingham soldier at the centre of a row over his turban have hit back – pointing to the 80,000 Sikhs who died for Britain in the two World Wars.

Jatinderpal Singh Bhullar’s relatives said they could not understand why the Army’s decision to allow the 25-year-old to wear the headdress instead of a bearskin outside Buckingham Palace had caused such disquiet.

They spoke after former members of the Scots Guards complained the spectacle would look “ridiculous” and make a mockery of the regiment’s 180-year tradition of wearing bearskins on ceremonial duties.

Serving soldiers, who are barred from speaking publicly on such issues, were also reported to have reservations about Bhullar’s exemption.

And it was claimed he had suffered taunts from fellow servicemen about his turban and his refusal to cut his hair and beard.

But Bhullar’s uncle, Gurpartap Singh Bhullar, said he was confident the furore would die down once the soldier had gone on parade.

Gurpartap, aged 57, said his nephew was the third generation of his family to join the Army and highlighted the huge sacrifice made by Sikh soldiers in both the First and Second World Wars, with more than 80,000 killed in the conflicts.

“Sikhs are Army-orientated and that goes for our family too. My grandfather fought in the First World War and my father was a gunner in the Second World War,” he said.

“Thousands of Sikhs have fought and died for the UK. They never gave up their turbans so why can’t a Sikh soldier guard the Queen while wearing his?

“A Sikh must always wear his turban. ”

Slough-based Gurpartap said Bhullar, who lives with his wife near Birmingham city centre, gave up a lucrative career as a bricklayer to join the Army.

His company is currently responsible for public duties and guarding the Queen and he is expected to parade outside Buckingham Palace in the next week.

When he does so, Bhullar – who is among a handful of Sikh soldiers in the Army – will become the first member of the Scots Guards not to wear a bearskin in a ceremonial capacity since they were introduced.

He has the backing of the Ministry of Defence, with a spokesman saying the Army took “great pride in its diversity”.

But the decision was attacked by members of the Scots Guards’ regimental association.

David Cuthill, chairman of the Dundee branch, said: “It should be regiment first and religion second. A guardsman is not a guardsman if he’s not wearing his bearskin.”