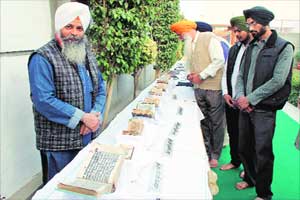 Narinderpal has a hobby to collect such rare things and plans to take his exhibition to other parts of the city as well. “Over the years, I have collected these rare things and I have spent lakhs of rupees on this collection. I want to make the young generation aware of our rich cultural heritage. So I keep on organising such exhibitions,” he says.

On display were 184-year-old handwritten Guru Granth Sahib, which Narinder got from a UP-based family, Adhyatam Parkash Granth of 1669 AD, Bhagat Vani, Bhai Gurdas di Vaaran and 18 other handwritten manuscripts.

Old weapons used in wars between Mughals and Sikhs were also on display. These included daggers, swords, bichua, katar and zambia.

Narinderpal has converted the ground floor of his house into a museum where he will display all these rare things. He is working on digitisation of the entire collection.