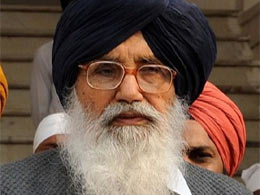 Chandigarh, Punjab: Any attempt to shift water from State List to Concurrent List would lead to “widespread resentment amongst the states”, Punjab Chief Minister Parkash Singh Badal on Sunday said.

He termed it as an “undemocratic move”.

“The Centre’s intended move to transfer the subject of water from State List to the Concurrent List was against the basic spirit of federalism and would further weaken the states thereby encroaching upon their rights,” Badal said in a statement here.

He said that Centre should desist from taking this “un-democratic step which would lead to widespread resentment amongst the states”.

In the Constitution, water is a matter of State List.

On July 13, while speaking here, Union Water Resources Minister Pawan Kumar Bansal had said that, “members of a Parliamentary Committee have favoured the idea of putting water in the Concurrent List to help the Centre have a greater say in settling inter-state disputes.”

Across the party lines the members were almost unanimous on the issue, Bansal had claimed. However, he also added that the Government had so far taken no view over the matter.

“The Centre should rather sincerely strive to resolve the inter-State water issues within the ambit of settled and internationally accepted principles of the riparian law,” Badal said.

The chief minister vehemently opposed the “attempt” of the Consultative Committee of Parliament constituted to form a new national water policy “recommending the transfer of Water subject from State list to the Concurrent list as mentioned by Bansal in a joint press conference addressed at Chandigarh along with Chidambaram on Friday”.

Badal said he was pained to note that Chidambaram asked all the chief ministers and their representatives present in the meeting “not to raise any contentious issues like sharing of water and other inter-state territorial disputes, which could mar the cordial atmosphere of the meeting.”

2012-07-15
SSNews
Previous: Veteran Journalist Kuldip Nayar Apologises to Sikhs
Next: Uranium in underground water not due to fertiliser usage ?