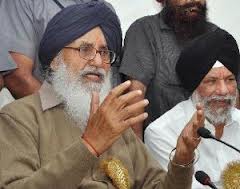 Chandigarh,India: The ruling Shiromani Akali Dal in Punjab here Sunday warned the Congress against meddling in the religious affairs of Sikhs.

Punjab chief minister Parkash Singh Badal, who is also the patron of the Akali Dal, said: “The Akali Dal would not tolerate any interference by the Congress party in the religious affairs of the Sikhs.”

Talking to the media in Rakhra village of Patiala district, 100 km from here, Badal said the amending of the Delhi Sikh Gurdwara Act by the Congress government in New Delhi showed that the Congress was meddling in the religious affairs of the Sikhs, “thereby inciting their religious passions, which could never be tolerated”.

He said that this was not first such instance of the Congress hurting the religious sentiments of the Sikhs.

Badal alleged that the sole aim of Congress leadership behind the amendment was to extend benefits to Delhi Sikh Gurdwara Management Committee (DSGMC) chief Paramjeet Singh Sarna and his coterie, who were working at the Congress leadership’s behest to weaken the religion.

Badal said that the government’s move to delay the Delhi Gurdwara elections was a “well calculated conspiracy” in the guise of the amendment bill “so that Sarna and his coterie could cling to their posts”.

The chief minister said he had already met Prime Minister Manmohan Singh and Home Minister Sushilkumar Shinde and had sought their intervention to stop the central government from proceeding to amend the bill.

The Akali Dal holds indirect control of Sikh religious affairs in Punjab through the Shiromani Gurdwara Parbandhak Committee (SGPC), the mini-parliament of Sikhs, which manages all gurdwaras in Punjab, Haryana and Himachal Pradesh.