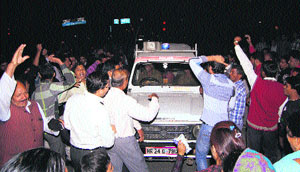 Dera-Sikh group clash: Sikhs warn of stir if accused not arrested by Nov 23

Comments Off on Dera-Sikh group clash: Sikhs warn of stir if accused not arrested by Nov 23 544 Views

Sirsa,Haryana: A day after a clash broke out between Sikh and Dera Sacha Sauda followers, Sikhs organized a meeting at Gurdwara Dasam Patshahi on Monday. The Sabha gave a ultimatum to the police to arrest those behind the attack on a Sikh in Jiwan Nagar village of Sirsa district on Sunday.

Later, Sukhwinder Singh Khalsa, state president of Shri Guru Granth Sahib Satkar Sabha, told media persons, “Those who attacked a Sikh in the village must be arrested by November 23, or face action. We will hold a protest, peacefully, on November 24…. We request the government to take back the Z Plus security of Dera chief Gurmeet Ram Rahim Singh. A case of conspiracy must be registered against him (Dera head).”

A Dera follower and two Sikhs were injured in a clash at Jiwan Nagar area of Rania block of the district on Sunday afternoon. While Jasbir Singh and his associate, both residents of Samkherha village, were taken to the civil hospital. Jagtar Singh, a Dera follower, was hospitalized in a private hospital here. Later in the evening, Dera followers had resorted to road blockade to protest against police inaction.