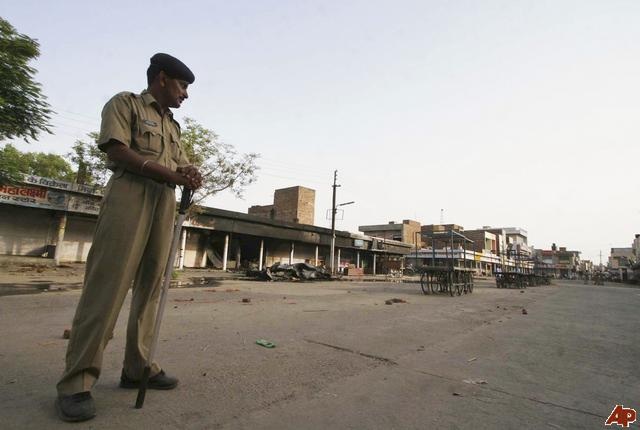 Sirsa,Haryana: In fresh confrontation between Sikhs and Dera Sacha Sauda in Sirsa – the sect’s stronghold, four Sikhs and three Dera followers were injured in a clash on Saturday.

Six vehicles were set afire as followers of the dera and Sikhs pelted each other with stones near Balmiki Chowk on Saturday afternoon, forcing the district administration to impose curfew in the entire city. Fifteen companies of paramilitary forces were rushed to the town.

Among the injured is Sant Gurmeet Singh Tilokewala, an SGPC member, who was taken to a hospital by Sirsa DC J Ganesan.

This was the third such clash between the two groups over 10 days. Saturday’s flare-up happened minutes after members of Guru Granth Sahib Satkar Sabha and Sikh devotees left following a meeting at a gurdwara near Balmiki Chowk.

The district administration officials and the police had called a meeting with Sikhs who had promised to maintain law and order in the city.

Sirsa superintendent of police Rajshri Singh said, “Dera followers are to be blamed for this incident as Sikhs had peacefully dispersed after the meeting.

Some Dera followers (premis) attacked them. I reached the spot and tried to control the situation,” she said. “Sikhs had withdrawn their bandh call, given after the earlier clash. It was the dera followers who attacked and provoked Sikhs,” she added.

Khalsa dismissed the allegations. “After promising the DC and SP to maintain peace we had dispersed from the gurdwara. When our men reached Balmiki Chowk, they (dera followers) attacked us. Our people rushed inside for safety, and within no time, the premis had started pelting them with stones and set vehicles on fire,” he added. Meanwhile, the administration has urged the residents to maintain peace and not to believe any rumour.