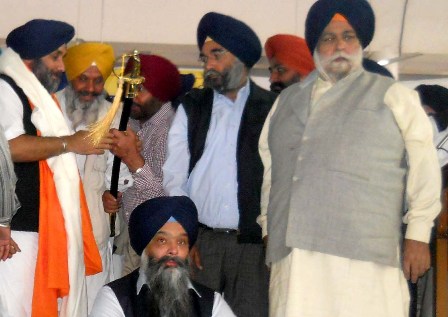 Delhi: On a day when Shiromani Akali Dal president and Punjab Deputy Chief Minister Sukhbir Singh Badal announced the first list of 15 candidates for the Delhi Sikh Gurdwara Management Committee (DSGMC) elections, its Delhi unit president Manjit Singh G.K. expressed concern that attempts were being made by the Delhi Government to get the Centre to issue an Ordinance for having separate elections for the post of president of DSGMC and other office-bearers.

Mr. Singh said: “I have come to know that the Delhi Government has been pressing the Centre to bring about an Ordinance to amend the conditions of the Central Act which governs gurdwara elections in Delhi.”

The Government had on October 8 proposed an amendment to the Delhi Sikh Gurdwara (Amendment) Bill, 2012, to remove corruption and horse-trading and make the administration more accountable. The Shiromani Akali Dal (Badal) had described the proposed amendment as a conspiracy to interfere in the religious affairs of the Sikhs for political gains. It said that the Delhi Government was trying to have two elections as it supported the Paramjit Singh Sarna-led Delhi Akali Dal here and believed he could retain his president’s post in a direct contest.

The SAD had stated that it was in favour of polls in the existing format as the President, the Prime Minister and even the Chief Ministers were elected by elected representatives.

Delhi Gurdwara Elections and Gurdwara Administration Minister Arvinder Singh Lovely said the Delhi Government had forwarded its Cabinet approval to the Ministry of Home Affairs. Stating that “it [this approval] has not been cleared so far and that the DSGMC elections are to be notified by December 31,” Mr. Lovely denied that any new attempts were made to press for an Ordinance.

Earlier, Mr. Lovely had defended the Cabinet decision stating that a lot of complaints were being received about corruption in gurdwara management as members could switch loyalties easily in the absence of any anti-defection law. Consequently, he had noted, the positions of the chairman and other members of various institutions were being compromised.

Mr. Lovely had stated that the Delhi Government had proposed the introduction of a two-vote system for separate elections for the post of president of DSGMC and its members as it wanted to “give the power of election to the people of Delhi. They will be able to elect the DSGMC president as also its members. What is the harm in it?”

Previous: Sikh moves court for disappeared Canadian daughter
Next: Memorial to a Genocide: Insist on justice