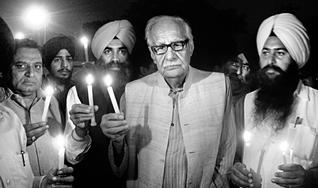 Jalandhar, Punjab: Senior supreme court advocate H S Phoolka has asked various Sikh organizations to stop protests against veteran journalist Kuldip Nayyar for his book Beyond The Lines; An Autobiography while accepting his apology in the spirit of remembering and appreciating his past endeavours for the community.

Recalling several instances where Nayyar took up cudgels against the union government in eighties not only as a journalist but also as an activist to seek justice for the Sikhs, Phoolka, face of legal battle for getting justice for the victims of November ’84 anti Sikh riots, said that it was unfortunate that a controversy started regarding his recent book and he was being projected by some organizations as if Nayyar was an enemy of the Sikhs.

“Though I also may not agree with Nayyar on some of the things mentioned in his book, but that does not mean that we should forget and wash away all the contribution he has made in the past to the Sikh community and start projecting him as the enemy of the Sikhs,” Phoolka argued.

Nayyar has already tendered an Apology to appease any sections of the community that may have felt hurt, Phoolka said while adding, that apology should have finished the matter especially when he had promised to remove a few portions from his book in future editions.

“It must not be lost sight of that many of the things written by Nayyar in his book have been written by many other authors in books published earlier, but they were not challenged or brought up with such furore nor was an apology ever offered,” he pointed out.

Kuldip Nayar’s name was among the few well known Journalists at the National level who fully supported the Sikhs during those difficult days of eighties. “His contribution is not only as a journalist, but as an activist as well. I have been a part of many movements which have been led by Nayyar on issues relating to Sikhs. Some of these are as follows,” he said.

He recalled Nayyar’s leading role in forming Emergency Virdhi Morcha in Punjab in 1987, courting arrest for getting Jodhpur detainees released in 1988, Constitution of Nanavati Commission after Nayyar raised the issue in Rajya Sabha in 1999, spearheading a campaign after Nanawati’s report after which government ultimately had to succumb to pressure and agreed to register the cases against Tytler and Sajjan Kumar and Tytler had to also resign from the Union Cabinet as a Minister. It was Nayyar’s petition in Delhi High Court which led to appointment of a special public prosecutor to handle the cases of Nov’84 Genocide, Pholka recalled.

“In view of the contribution of Nayyar and his role in the past many decades, it is in the interest of the Sikhs and in the spirit of appreciating what all Nayyar has done in the past that the apology should be accepted and further protests should be stopped,” Phoolka said.