Someone trying to create rift between Sikhs, Ahmadiyas alleged

Amritsar,panjab: With a view to create rift between Sikhs and Ahmadiya Muslims, a person using fake ID on Facebook has allegedly attempted to denigrate Guru Nanak Dev and other Sikh gurus.

Spokesperson and secretary for general affairs,Sadar Anjuman Ahmadiyya, Mohammad Naseem Khan told TOI on Monday that the Ahmadiya Muslim community had taken serious note of the incriminating issue that surfaced on social website Facebook on October 6.

“A person with a fake ID has tried to besmirch Guru Nanak Dev along with other gurus with an ulterior motive to malign, drag and implicate Ahmadiya Muslim Jamat into a very embarrassing and inconvenient position,” he said.

Member, Ahmadiya press committee, Chaudhary Maqbool Ahmad, said that on a Facebook account, the person, using a fake ID, had put photographs of Guru Nanak Dev, other Sikh gurus and founder of Jamat founder Hazrat Mirza Ghulam Ahmad and had given objectionable remarks.

He apprehended that the whole operation could be Pakistan-based where Ahmadiyas had been declared non-Mulsims and were subjected to persecution.

Khan said that one Tahir Ahmad, with a fake name and fake identity, had tried to denigrate the Sikh gurus and manipulate the names of Ahmadiya Muslims in order to sow seeds of discord between the two communities. Condemning the machination against Ahmadiya sect, Khan said that a delegation of Jamat met senior superintendent of police, Batala, demanding strict action against the culprits .”We want the culprits to be booked for treason against government and nation,” said Khan, adding that the cyber criminal should be traced immediately and punished. 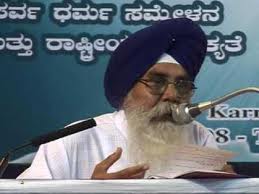 Previous: Penn Sikhs strive to teach students about values, history of Sikhism
Next: The vilification of Sikhs