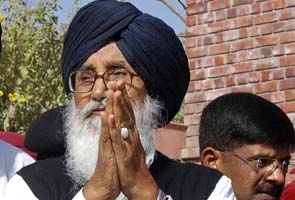 Patiala,Panjab: Punjab Chief Minister Parkash Singh Badal today accused the Congress of interfering in the religious affairs of Sikhs, which would not be tolerated by the Shiromani Akali Dal (SAD).

The move to amend the Delhi Sikh Gurdwara Act, 1971, by the Congress government in Delhi was a “testimony to the fact” that the Congress was meddling in the religious affairs of the Sikhs, Mr Badal told reporters.

The Chief Minister, who was here to observe the 16th death anniversary of Subedaar Bapu Kartar Singh Dhaliwal, the father of Cabinet minister Surjit Singh Rakhra, alleged that this was not the first such instance.In the past, the Congress party has been involved in various such activities due to which the religious sentiments of the Sikhs have been hurt time and again, he alleged.

He also alleged that the sole aim of the Congress leadership behind this amendment was to extend benefit to Delhi Sikh Gurdwara Management Committee (DSGMC) chief Paramjeet Singh Sarna and his coterie, who were working at the behest of the party to weaken the Panth.

He had already met the Prime Minister and the Union Home Minster for seeking their intervention to stop the Congress government at Delhi from proceeding with this amendment bill.

When asked about the objections made by state Congress president Captain Amarinder Singh regarding the appointment of Justice J S Sekhon as Lokpal of the state, the Chief Minister alleged that he was issuing baseless statements.

Justice Sekhon was a legal luminary who had rendered outstanding services to the nation and his appointment was totally in accordance with the rules which have been duly endorsed by the Chief Justice, Speaker and Governor of the state, Mr Badal said.