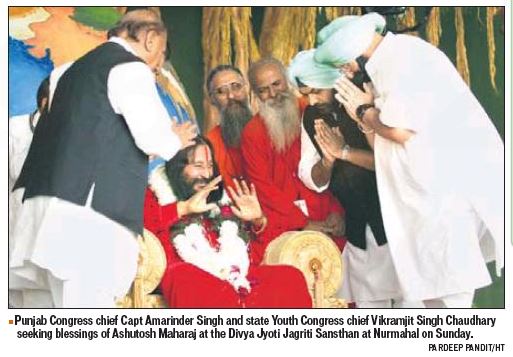 Comments Off on Congress chief Amarinder visit and pays respect to Ashutosh 1,142 Views

Amarinder and his team spent at least 30 minutes with the followers of anti-sikh baba Ashutosh and attended his pravachan (sermons). Amarinder garlanded the dera head as a mark of respect. The visit was arranged by PYC president Vikramjit Jit.

This was Amarinder’s second visit to the dera. He had earlier visiteded the dera during the Adampur byelection. To a query, he claimed that the visit had nothing to do with the coming parliamentary elections. To another question, he said: “We respect all the deras.”

After Narakdharis, Noormahal  was the second cult to have physical clash with the Sikhs. The cult was started  by a Bihari “bhaeeya” named Ashutosh soon after the decline of the Sikh  movement. Ashutosh was a servant at “Delhi Manav Dharam” from which he was  kicked out due to his immoral activities. He left Delhi and came to Patiala  where he became the puppet of the government and decided to mislead people of  Punjab. He established his center in Noormahal and called it “Diveya Jyoti” or  light of God. His misleading propaganda involves some new and different scamming  techniques than many of the other cults.

To mislead the people, Ashutosh has his pictures  taken wearing different dresses. He is wearing turban in one picture and has  hair open in the other. He wears orange dress to pose off as a Hindu saint and  green clothes to look like a Muslim ‘pir’.

Belief system of Noormahal  cult is created solely to insult Sikhi. Saroops of Guru Granth Sahib are kept in  the dera just like other books on the shelf and read like books. No respect is  shown such as washing hands, covering head and wrapping in rumalas. Gurbani is  called “summary of Vedas”. Gurbani is quoted and misinterpreted in their  programs on daily basis. Followers are preached that keeping hair, reading bani,  following the Shabad Guru, wearing five kakkars and going to the Gurdwara etc.  are waste of time. Gurbani is misused to prove their belief system. Insulting  comments are delivered about Khalsa in their programs and they refer to  themselves as the ‘true khalsa’. They believe Jot of Guru Sahib is not in Guru  Granth Sahib but within themselves and consider themselves the ‘true image’ of  the Guru. Sikh martyrs of 1984 and Khalistan movement are branded as terrorists  and Ashutosh is portrayed as the only ‘national hero’. It is further preached  that all Gurus were Hindus and Guru Gobind Singh Ji revered hindu deities.

They hold regular diwans at  the heart of Sikh cities like Taran Taaran, Amritsar and Gurdaspur. Many times,  events of 1978 have been repeated where police was used for protection and  attacking and killing the Sikh protestors. On one occasion, a program was held  on 19th April 2002 at which a preacher of Ashutosh, Shardha Nand,  grossly insulted Sikhi and Guru Granth Sahib (video can be found online). When  Sikhs showed up to protest they were attacked and fired upon. Shardha Nana  escaped in government vehicles and Sikhs were arrested for causing violence.  Similar events have taken place in other cities but with the help of the  government Noormahals always managed to escape and Sikhs became the target of  violence and police brutality. All of this is being done to cause violence in  Punjab so that the government could move in and kill Sikhs in large numbers in  the name of “terrorism”. Such events are also used to identify Sikhs who are  outspoken and show some bravery. They are arrested and put away in jails forever.

Preachers are trained to tell  false stories to glorify Ashutosh to attract new followers. One time a woman  preacher came to an Amritdhari person and started telling made up stories about  Ashutosh. She claimed that Ashutosh is so great that one time one of his  followers had passed away and was cremated at a grave yard. But Ashutosh liked  him so much that he brought the dead follower back to life. The woman preacher  was not even finished with the story that an Amritdhari Sikh grabbed her from  throat and threatened to kill her. She started begging for life and mercy.  Amritdhari said, “Don’t worry. You will be brought back to life by your guru. So  why are you afraid?” She replied, “We are taught to tell these false stories to  mislead Amritdharis and convince them to follow Ashutosh.” This is just one  example of how they deceive and mislead people into following an immoral person.

Ashutosh has a taste for  wealth and women. While he takes a large sum of money from his followers he also  urges them (especially Sikhs) to donate their young daughters to him. He sells them in the flesh market in Bihar. According to a report published in  “Shamsher-E- Kaum” two girls Rekha and Paramjit were sold in Bihar for 500,000  rupee (half million) each. His follower Mr. Sandhu from village Duniya testified  to this. This is being done to destroy the progress of Sikh faith and Sikh  population.

Ashutosh was caught having an  illicit relation with his female follower named Sweeti in Chandigarh. He was  caught by his driver who decided to expose his true face. Although numbers of  his followers have decreased since then but Sikhs collectively need to start a  massive campaign of parchaar to deal with this thug. If Sikh preachers work hard  and preach Gurbani then no one will be brainwashed and Sikhs will stay stronger  in their faith. Only then such cults will go out of business.

Previous: Sikh museum to be opened at Sultanpur Lodhi by Nov 26
Next: Another Sikh Gurdwara targeted in United States 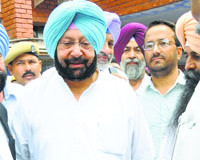 Stay away from politics: Capt to Takht Jathedar 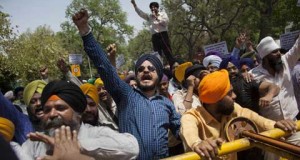