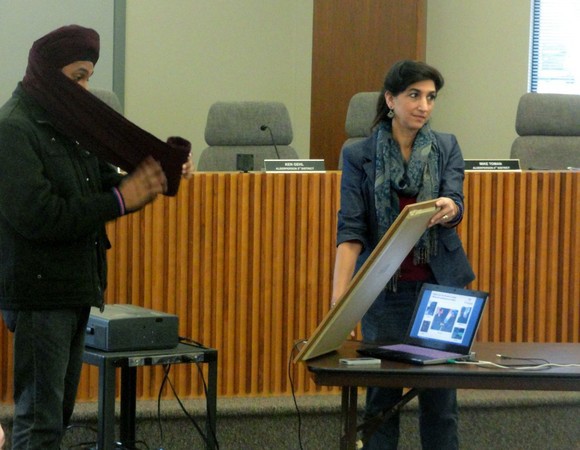 Comments Off on Community Education on Sikh Religion Continues 619 Views

Wisconsin,USA: One of the many realizations following the Aug. 5 mass shooting at the Oak Creek Sikh temple was how little people knew about the Sikh faith.

Despite being the fifth-largest religion in the world, the shootings were—sadly—an introduction to the Sikh community for many in Oak Creek and across the country, 100 years after the first Sikhs came to the United States.

Things have changed in Oak Creek, of course, in the months since a gunman with white supremacist ties took the lives of six temple members and wounded four others. Oak Creek and the Sikh community are strangers no longer; they will forever be linked with each other.

But there is still work to be done, and that brought a representative of the national Sikh Coalition to Oak Creek and the Milwaukee area this week.

Manbeena Kaur, education director for the coalition, gave presentations to the Oak Creek Police Department and a group of city employees Monday and will be in Oak Creek and Elmbrook schools later this week.

In addition, short films will be presented by Sikh filmmakers Valarie Kaur and Sharat Raju Wednesday at South Shore Cinema and Thursday in Racine as part of “One Community, One World: Understanding the Sikh Community.”

“There’s definitely a willingness for people to embrace Sikhs now,” Kaur said in an interview following her presentation at Oak Creek City Hall. “That’s why this is such a crucial moment for both the non-Sikh community as well as the Sikh community to start having those conversations and open other doors to each other.”

Kaur’s hour-long presentation covered the essentials of the Sikh faith and the history of Sikhs in America, noting that like other immigrant groups, it has been a long struggle for rights and equality.

The presentation also addressed many common questions, like “why do Sikhs wear turbans”? Kaur noted that Sikhism is the only religion that requires turbans; others who wear them do so for cultural reasons.

“It all centers around this idea of identity—being able to be identified as Sikhs,” Kaur said. “When Sikhs wear long hair, we keep our turbans and beards, we’re basically having a neon sign to everybody that says ‘I am a Sikh.'”

However, it was that identity that made them targets for violence after the Sept. 11, 2001 terrorist attacks.

The Sikh Coalition was founded Sept. 12 in response to a violent attack on an elderly Sikh and two teenagers in a New York park. Balbir Singh Sodhi was murdered four days later in Arizona by a person who claimed he wanted to “kill a Muslim.”

Over the next decade, robberies, vandalism and other crimes against the Sikh community continued, including in the Milwaukee area.

The Sikh Coalition has fought for more respect for the Sikh community and received renewed attention following the Oak Creek shootings.

Kaur, a Texas resident, said she has been asked to do more presentations since Aug. 5, though this is her first trip to Oak Creek.

“Unfortunately it’s coming on the heels of this horrific tragedy,” Kaur said. “But I have just felt a very strong sense of support and gratitude from everyone I have met here. It’s wonderful how (Oak Creek) has embraced the Sikh community in this way and really opened their doors to us. It’s been amazing.”

Jaspreet Singh, whose father Punjab Singh was seriously wounded in the attack, was also on hand and gave a demonstration on how his turban tied and untied.

He said afterward that his father’s recovery continues to be slow. Punjab Singh was shot in the head in the Aug. 5 attacks and was transferred from Froedtert Hospital in October to continue receiving around-the-clock care.