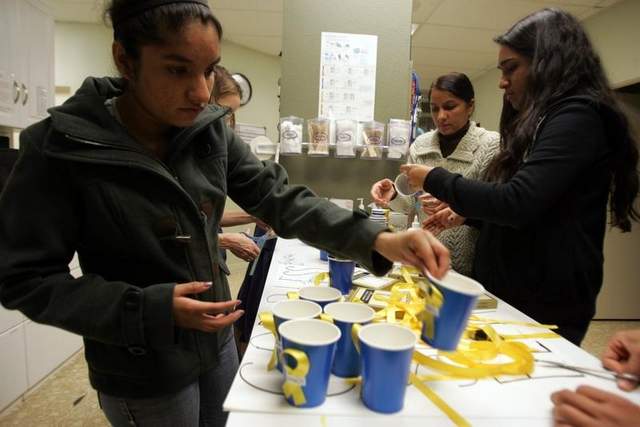 California,US: desert hot springs As the nation tries to make sense of the massacre that took place in Newtown, Conn., less than a week ago, four Palm Desert teens practice their speeches and add the finishing touches to posters commemorating those who lost their lives at Sandy Hook Elementary school.

The posters will sit among candles at the Palm Springs Temple in Desert Hot Springs on Thursday evening in what will be the first known public memorial in the Coachella Valley for the victims.

It was Amarpreet Deol, 18, her brother Jagdeep Deol, 14, and siblings Amreet Badesha, 18, and Itender Badesha, 14, — all members of the Sikh temple — who set plans for the vigil in motion.

“We felt really saddened by what happened. All these innocent children lost their lives,” said Amarpreet Deol. “We wanted to let them know that we’re there for them, and we sympathize with them.”

Since the events unfolded in Newtown on Friday, the Sikh community across the nation has been quick to respond with vigils.

A white supremacist killed six people at a Sikh temple in Oak Creek, Wis., in August.

“It stems from the solidarity we feel for this tragic event, ” said Simran Kaur of the West Coast chapter of the Sikh Coalition based in New York City.

The shooting in Connecticut reopened old wounds in addition to creating new ones, Sikh leaders said.

“After the Oak Creek, Wisconsin, shooting, the whole nation felt our pain. We are a part of this nation, and we feel the same pain,” said Sukhdev Kaur Ghumen, president of the Sikh Religious Society in Palatine, Ill., which has planned a vigil for tonight.

In Fresno, a Sikh temple held a vigil on Sunday for the students killed in the massacre. A Gurdwara — or place of worship for Sikhs — in San Jose has scheduled a vigil for this week.

The teens at the Palm Springs temple hope that the vigil brings a form of healing but also awareness of gun violence.

“I hope they walk away thinking that if something were ever happen to them, that they wouldn’t be alone,” said Itender Badesha.