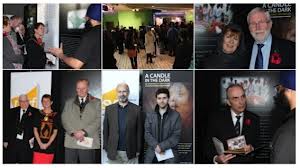 London, United Kingdom: According to a newsletter by National Sikh Youth Federation (NSYF) the members of the NSYF team are currently on tour with the ground-breaking exhibition.

“This first of its kind exhibition explores how the spiritual philosophy and political ideology of the House of Guru Nanak and its mission to build a truly utopian society has encountered violent opposition throughout history. The exhibition takes you on a journey from the beginnings of the Sikh Way right up to the shocking events of recent times, the 1984 genocide of the Sikhs” reads the newsletter.

“Our first public display in the REC Centre in Slough was extremely successful, hundreds of local residents and the Slough MP Fiona MacTaggart attended the exhibition. We had an overwhelmingly positive response. Fiona MacTaggart found the exhibition ‘very interesting’ and was ‘sure it will inform a lot of people who are ignorant of the events that it focuses on’“Our second display in Derby was equally well attended; we had a great turn out of local residents, Councillors and the Mayor Lisa Higginbottom who said that he was very, very impressed by the exhibition and the professionalism of the exhibition and when you told me you were founded in March, this year, he was even more impressed. The MP for Derby North Chris Williamson, who also attended, commented “it was an incredibly moving exhibition…it is really important that exhibitions like this are held around the country…in order to ensure that in future there are no such atrocities”

The Exhibition has reportedly received a great reception in Leeds hundreds of local residents and the Chair for the Sikh All-Party Parliamentary Group, MP Fabien Hamilton and local Councillors attended to show their support and view the Exhibition.

Fabien Hamilton reportedly commented that initiatives such as this are much needed and thanked the NSYF for “putting together such a great exhibition”.

“In addition to providing tours to politicians our team took great pleasure in running guided tours in both Punjabi and English to members of the community, especially local children from Khalsa Clubs, Sikhi and Punjabi Classes and local schools. We were amazed by the level of attention and understanding shown, both by children from the Sikh and non-Sikh community” Shamsher SinghHe further added that: “the comments made by regional and national politicians that attended reinforces the view of the NSYF; that when our history is articulated in a narrative that places the events of 1984 into the wider context of Sikh history; it is clear to see how the massacres were part of a pre-planned politically motivated genocide”.

In order to widen our campaign to commemorate the genocide of Sikhs in November 1984. NSYF continued to use varied methods to engage the public. In conjunction with the start of our exhibition tour we launched a social media campaign via Twitter and Facebook that recreated a historic newsfeed of the events of 31st Oct – 5th Nov.

“This campaign, called #6DaysOfTerror, was similar to our June campaign, where we also used historical pictures and verified sources to create a daily newsfeed. We were glad to see these images shared internationally over social media” NSYF has informed in a recent newsletter.

“On November 5th we also organised a screening of the multi-award winning film Amu, which tells the story of one of the victims of the genocide and her journey to uncover the truth. The showing was well attended with an impressive turnout from the local community. The medium of film is an excellent way to engage with an audience and we will be holding similar events in the future” the newsletter reads further.

Additional Locations:Disclosing NSYF plans Shamsher Singh told that they are looking forward to displaying our exhibition in Glasgow this week from the 22nd to the 25th of November at Guru Nanak Gurdwara. Due to the popularity of the exhibition we have had many requests to increase the locations of our tour. After Cardiff and Gravesend we are happy to announce that we will be extending the tour and displaying the exhibition in the new multi-million pound Sikh centre in Smethwick from the 13th – 16th of December.