USA,Tragic accident, or racist hatred?Either way, local Sikhs are reeling from the news that their temple-to-be, which would have been the largest Sikh temple 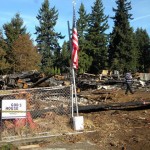 in the region, burned to the ground early Oct. 12.

Sarabeet Teja, president of the Guru Ramdass Sikh Community, met Vancouver fire investigators at the site, the former Landover Athletic Club at 13400 N.E. 20th Street, on Thursday morning. They spent an hour going through blueprints and building plans in order to assist the investigation.

Officials had no comment and Teja told The Columbian the investigation is still under way. He’s been told there probably won’t be any news for weeks to come.

Clark County property records say the building and grounds combined were valued at $513,000. Teja said the property was insured.

Also looking into the matter are the FBI and the U.S. Bureau of Alcohol, Tobacco and Firearms. Federal involvement is standard procedure for any fire at a place of worship, according to Vancouver Fire Dept. spokesman Capt. Kevin Murray.

But fearing the worst may be understandable for American Sikhs. Numerous crimes of hatred and harassment against turban-wearing Sikhs have been reported in the years since Sept. 11, 2001. In August of this year, a military veteran with a gun opened fire at a Sikh temple in Wisconsin, killing six.