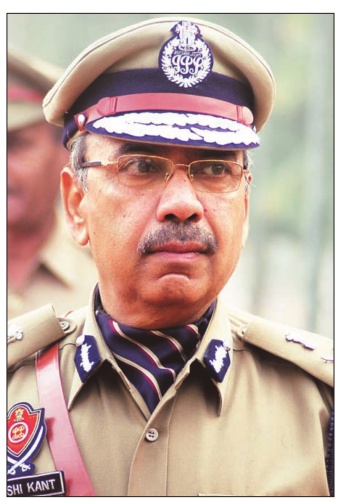 Chandigarh, Punjab: Embarrassed by what has become a public spat between Punjab Police’s top officers, the state government on Wednesday delivered a stern message to state police chief Anil Kaushik and DGP (prisons) Shashi Kant, urging them not to go public with their grievances.

Home secretary DS Bains, who met the duo together, later said that Kant’s official vehicles will stay with him. Accelerating the row, Kaushik had earlier directed the DGP (prisons) to surrender his official vehicles. However, according to police sources, Kant barely stayed in the meeting for 10-15 minutes, after which Bains had a detailed conversation with Kaushik.

Wednesday’s developments come after Kant’s repeated comments to the media about the “police inaction“ in tackling the alleged nexus between the drug mafia in the state and certain “influential people“. In an apparent response to Kant’s biting remarks, Kaushik in a letter directed the DGP (prisons) to surrender his three vehicles.

Seeking cooperation between the two on issues ranging from logistical support to the police’s prisons wing, to curbing the drug menace in jails, Bains on Wednesday urged the duo to avoid talking to the media on issues that “spoil the decorum“.

“What I can say is that the vehicles in question will remain with him (Shashi),“ Bains said, refusing to divulge more details of the meeting.

The DGP (prisons) had on Tuesday said the letter calling for the vehicles’ surrender was a fallout of his raising serious issues of concern like drug menace in jails.

Bains agreed that narcotics being supplied to prisoners and use of mobile phones in jails -the issues which Kant has raised -are matters of concern in Punjab. He said he would soon convene a meeting of the two DGPs along with the ADGP (intelligence) Suresh Arora to discuss the issues.

After the DGP (prisons) left the meeting, Kaushik argued that Kant had been the intelligence wing chief in the past but never raised such issues before, sources said. `Magisterial inquiry awaited’ Bains told HT that the state government was yet to receive the magisterial inquiry report into the prisoner violence at Kapurthala central jail, which erupted on November 20 after the death of an inmate who was a drug addict.

The violence led to the death of another prisoner. The prisoners, who were reportedly high on drugs, cut the iron gates using flames from cooking gas cylinders.

“The SDM (sub-divisional magistrate) got transferred and then the elections came,“ said Bains, explaining the delay in submission of the inquiry report.

Director general of police (prisons) Shashi Kant is in the eye of a storm. First, he claimed he was under the threat of the drug mafia, and then accused the state police of going soft against narcotic smugglers — an assertion that raised the hackles of the force’s top brass, which hit back by ordering withdrawal of his security vehicles. In an exclusive interview with HT correspondent Pawan Sharma, Kant, a 1977-batch IPS officer, appeared to have climbed down from his face-off with state police chief Anil Kaushik, but kept up his anti-drug mafia stance. “Big fish are involved in drug smuggling,” he said, but was chary of naming anyone.

You seem to be at loggerheads with DGP Anil Kaushik as well as the political establishment ever since you started raising the issue of drug menace inside state prisons.
DGP Shashi Kant: I am not at the loggerheads either with the government or Mr Anil Kaushik who is a senior. There is no confrontation.

Then what compelled DGP Kaushik to withdraw your official vehicles?
Yes, this little controversy cropped up when I got letter saying that my vehicles should be withdrawn. I’ll talk to him (Kaushik) and try to sort out the issue.

What provoked me to raise this issue is the Kapurthala jail incident of November 2011 when under the influence of drugs, inmates had gone on a rampage and demolished all gates except the outer one.
That shook me and I decided to take up this issue. As far as positioning myself for the post of state police chief after March 6 (when the Punjab assembly election results will be announced) is concerned, it is not correct. I don’t have much time left. I will retire in the next six months (June 30) and I don’t think any government will make any person DGP for such a short period.

Why were you silent about the drug issue even three months after the Kapurthala prison episode?
The Kapurthala prison episode was a wake-up call, which shook me very badly. I didn’t take up this issue immediately because elections were round the corner. I didn’t want any of my statements to be used or misused by any political party. Now that the elections are over, I thought this was the time to take up this issue with the help of the Punjab government…and fight against the drug mafia and drugs. I am going to continue this fight even after my retirement.

Is there a police-politician nexus behind the drug menace and dug peddling in jails?
Big persons and big fish are involved in this trade.

Who are these big persons?
Well, this is something I don’t think I will be able to react on…because I don’t have the evidence and record. It (the evidence) is with Punjab police. I don’t have these figures with me in this department (prisons).

You have stated that you are facing threats. Who is threatening you?
I am facing threats. People have been telling me that whatever I am doing is coming in the way of the drug mafia. Big persons, big fish are involved in this trade.
They want that I should not raise this issue and stop my fight against the drug menace.

Can you name the people threatening you?
I cannot… If I take any name, then I have to prove it. I am not carrying the police records and files with me. These things are all with the police department. I don’t have any proof with me. All these proofs, I am sure, are in police files. And all of us (in the force) are aware of it. This is the reason why I am not prepared to take any names right now. I have taken upon myself the task of creating strong public opinion against the drug mafia.

Are the `big fish’ politicians, cops or drug peddlers?
All of us know who all are behind this trade. I don’t have enough money to fight defamation suits all my life. I am not blaming any particular group of persons or a section of society. But all of us know who these persons are.

Give us some indication of who they are
As I said I don’t have a proof in my hand.

You said all the relevant records are with the police, which means police chief DGP Kaushik is in the know. Did you take up the matter with the police department?
No no…I don’t think DGP Kaushik is aware of the names. This is the work of the intelligence wing where I did a stint too and where we had good (drug) seizures…All these things are on police records and need to be taken up.

You succeeded DGP Kaushik as DGP (prisons) in October 2011. What steps did your predecessor take to tackle the drug problem?
I never go into post-mortems. I never tried to check what exactly has been done by one person or the other.

But there has to be continuity of work
Yes. He (Kaushik) did commendable work, undoubtedly. I only continued with whatever he had started. May be the only difference could be that I am more vocal and more vociferous on this issue. Yes, he started the commendable work (on tackling drugs) and I am taking it forward more vociferously, more strongly and with more conviction.

So what is the provocation behind his withdrawing your vehicles?
He must be having some of his own compulsions behind this scarcity of vehicles. More than this I really don’t know. Whatever I am saying about drugs in prisons is all contained in the reports of the justice Amar Dutt committee. The report talks about the drug menace, use of mobile phone inside jails, it talks about people sending drugs and cellphones inside prison by tossing them over the outer walls.