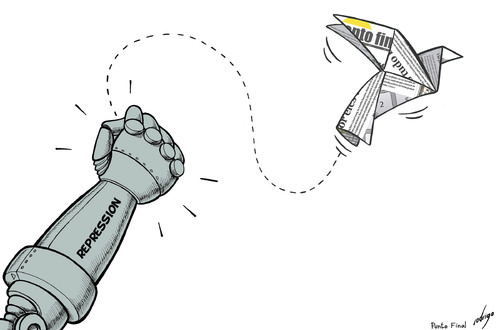 The men of Radha Soami Dera at Beas, which preaches non-violence, attacked the crew of Sangat TV at village Jodhe near Beas in the district of Amritsar. However, both the members of the crew were lucky enough to escape the attack.

The crew members – Baljeet Singh, a correspondent and the camera man Monu – had to virtually run to save their lives as both of them were attacked by Dera men on Saturday.

Though the police have been informed of the incident and a formal complaint has been handed over to an officer not less than the rank of a SP, there has been no action as yet.

Talking to ‘Yes Punjab’ Baljeet Singh told that Sangat TV had planned to shoot a documentary depicting the grievances and agony of people living in the neighborhood of the Dera as they had either been made to ‘sell’ their land or houses or they are being coerced to leave their land or house for the expansion of the Dera.

Patiala based Baljeet Singh told that they had gone to cover village Bal Sarai Khurd and were led to village Jodhe by some villagers who wanted to show them how the Dera was digging the land near their fields so as to force them to yield their land to the Dera.

“At about 4.30 pm as we along with the villagers reached there and saw about 200 people doing the job, the Dera men supervising the operations called upon the men to attack us and wasting no time men in groups ran towards us with whatever they had in their hands or whatever they could lay their hands on. We ran towards our car and were lucky to reach and start the same before we could be caught. However, as we ran to save our lives we fell in irrigated fields as a result of which we lost our shoes, a Camera, our mobiles and some other valuables and most importantly and sadly my turban also fell there”, he added.

“As they ran after us, we thought that if caught, we would definitely be killed by the group. But we were lucky enough to reach and start our car. We took the nearest available road which took us to Ghuman.”

At Police Chowki Ghuman an ASI Palwinder Singh told that this was the area under the influence of Dera and as such in a diplomatic way refused to register his complaint or help him.

Baljeet Singth then brought the matter into the notice of SHO Beas and later SSP Amritsar (Rural) Preetpal Singh who sent SP (D) Jagdeep Singh to talk to the journalists already gathered in favor of the Sangat TV crew.

The SP (D) was handed over a written complaint against the Dera men who assured that an FIR would be registered by Sunday evening.

Talking to ‘Yes Punjab’ SSP Preetpal Singh said that the enquiry of the case has been marked to SP (HQ) Manmohan Singh who would be submitting his report by Monday or Tuesday.

“We would definitely take the action, on the basis of the conclusion of inquiry report”, he said.

The Dera is already facing protests from Sikh Sangat due to the dismantling of a Gurdwara at village Waraich.

A press released issued by Randhir Singh, trustee of the Sangat Trust UK read that the trust strongly condemns the attack. It urged all sections of media in Punjab not to take it as an attack on individual as it was an attack on the freedom of the media.

Expecting active support from the media in Punjab, in this matter, S. Randhir Singh demanded from Police and Civil Administration besides the government of Punjab that strong action be taken against the culprits and safety of field journalists should be ensured.