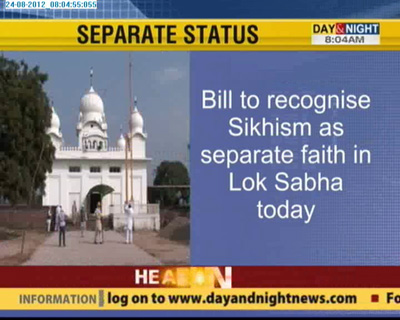 Amritsar, Punjab: With Shiromani Akali Dal MP Rattan Singh Ajnala moving a Bill in the Lok Sabha for an amendment in Article 25 of the Constitution that clubs Sikhs with Hindus, the ruling party in Punjab has taken another step towards fulfilling its Panthic agenda.

The agenda was kept on the backburner during the recent Assembly elections as the SAD (Shiromani Akali Dal) made development a poll issue. Political observers see it as a SAD bid to cater to its traditional Sikh vote bank that was virtually given a cold shoulder in the Vidhan Sabha poll. The SAD, in fact, projected itself as a secular party as fielded a sizable number of Hindu candidates.

Though the Bill will not bring the party any immediate electoral gains, it has its eyes on the 2014 Lok Sabha elections.

While moving the Bill, the SAD leadership, however, has given an impression that though it wants to push the issue forward, at the same time it wishes to keep away from it. Political pundits wonder as to how the Bill was introduced in the Lok Sabha at a time when both Chief Minister Parkash Singh Badal and Deputy Chief Minister Sukhbir Singh Badal were abroad.

Also the fact that Bathinda MP Harsimrat Kaur Badal, who always leads the charge in any debate on Sikh issues, didn’t move the Bill has taken many by surprise. It is being interpreted as a SAD attempt against upsetting its alliance partner BJP, which banks on Hindu votes.

Ajnala termed it as a step forward after the passage of Anand Marriage Amendment Bill 2012 in May this year. He said while the marriage Bill facilitated separate registration of Sikh marriages, the amendment in Article 25 will strengthen the distinct identity of Sikhs in the world.

SAD secretary Daljeet Singh Cheema, however, pooh-poohed the talk that the SAD leadership wanted to steer clear of the issue. He said Ajnala moved the Bill as the leader of their parliamentary group.

Former Rajya Sabha MP Tarlochan Singh said he had first moved the Bill for amendment in Article 25 in the Rajya Sabha way back in 2008 and it was listed thrice in the agenda, but never discussed. He said the amendment was a key demand of the Sikhs and the Congress MPs from Punjab should also extend their help in getting it passed.

Noted Sikh scholar Bhai Ashok Singh Bagarian said without the amendment in Article 25, even the separate marriage Act was meaningless.

Law Minister Salman Khurshid today struck a positive note on the demand to amend Article 25 of the Constitution to recognise Sikhism, Jainism and Buddhism as religions independent of Hinduism and said a consensus on the issue was entirely possible.

Speaking to The Tribune, Khurshid said the government was posted on the matter and was deliberating upon it. “We will have to see what position the Ministry of Home takes on this issue. We will then work forward on it. Consensus on this matter is entirely possible. We are discussing this subject and it will soon come before the Cabinet,” the Law Minister said on a day when the Lok Sabha had on its agenda a private member’s Bill of Akali Dal MP Rattan Singh Ajnala. He has sought an amendment of Article 25 of the Constitution, which says Hindu institutions of worship and Hindus would be construed to mean Sikhs, Buddhists and Jains.

Ajnala’s private member’s Bill could not be introduced in the House today as the proceedings were adjourned for the day over the NDA’s demand for the resignation of Prime Minister Manmohan Singh for his alleged role in the coal allocation scam highlighted by CAG. “The Bill will now be taken up on September 7,” Anjala said.

Titled ‘The Constitutional Amendment Bill 2012’, it can become a law only after the government adopts it as its own legislation as had happened with the Anand Karaj Amendment Act that Law Minister Salman Khurshid had moved as a Government Bill last year after Cabinet clearance.