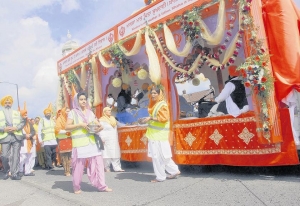 AMBITIOUS plans to plough £15m into building a new gurdwara to ‘cater for future generations’ as a one-stop shop for Sikh education have been revealed.

The group announced its grand plan to build an ‘inclusive’ gurdwara and education and media complex that aims to attract Sikhs from across Slough and surrounding areas.

The trust said the current two gurdwaras, in Sheehy Way and Woodlands Avenue, do not have a ‘vision and strategy’ to cope with the additional needs and number of affluent Sikhs in the area.

The gurdwara would be fitted out with the latest technology and facilities, a large lecture theatre and seminar rooms for the community and include a large car park.

The spokesperson said: “These initial donations of £2m will show we are extremely serious and allow the blue print we have in mind for this new complex to take shape.”

Previous: Sikh activist writes to Canandian PM ahead of his visit to India
Next: Superstorm Sandy: US gurudwaras turn into shelter homes